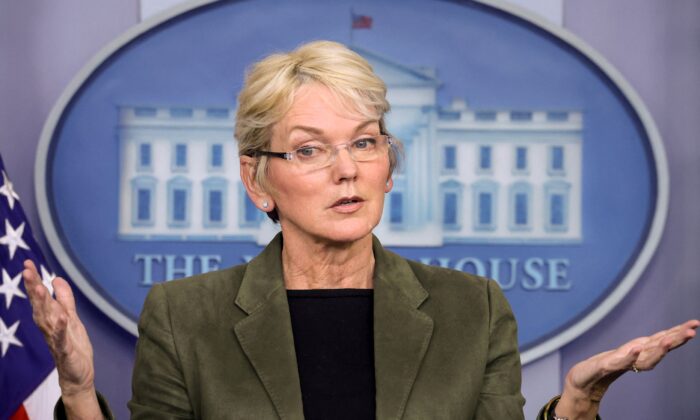 Secretary of Energy Jennifer Granholm takes questions during a media briefing at the White House in Washington, on Nov. 23, 2021. (Evelyn Hockstein/Reuters)
Executive Branch

U.S. Energy Secretary and former Michigan Gov. Jennifer Granholm violated the Hatch Act when she endorsed the Democratic Party in her capacity as a federal official during an interview last year, said the U.S. Office of Special Counsel (OSC) this week.

Granholm, the OSC said, explicitly endorsed Democrats during an Oct. 6 interview in her official capacity as Secretary of Energy with Marie Clare.

“OSC has concluded that Secretary Granholm engaged in political activity when she gave this response promoting the electoral success of the Democratic Party,” Erica Hamrick, the deputy chief of the OSC’s Hatch Act Unit, told the Foundation for Accountability & Civic Trust in a response letter. The group requested that the OSC investigate whether she violated the Hatch Act after the interview was released.

“While she then attempted to backpedal by stating that she was using ‘Democrats as a substitute’ for certain policies, at bottom she told listeners that they needed to vote for Democrats so that more Democrats would be elected to pass the legislation they wanted,” Hamrick also wrote, according to several news outlets. “Her attempt to backpedal does not change the meaning of her words or undo the fact that she was talking about the Democratic Party throughout her statement.”

The OSC, which is tasked with investigating possible Hatch Act violations, said that “Granholm has been advised that if in the future she engages in prohibited political activity while employed in a position covered by the Hatch Act, we will consider such activity to be a willful and knowing violation of the law,” reported the Detroit Free Press. Without elaborating, the office added that she did not have “significant” training on Hatch Act matters when she conducted the interview last year and has since received that training.

During her October 2021 interview with Marie Claire, Granholm was asked about how voters could become more involved in having specific policies addressed in Congress.

The Hatch Act, which was passed in 1939, prohibits federal government officials from partaking in activities that attempt to bring success or failure to a certain political party, a political candidate, or a political group when that person is on duty, in a federal room or federal building, using a federally owned or leased vehicle, or while wearing a uniform or wearing official insignia, according to the OSC’s website.

The Epoch Times has contacted the Department of Energy’s office for comment.

A spokesperson for the agency said that Granholm received the training since her interview.