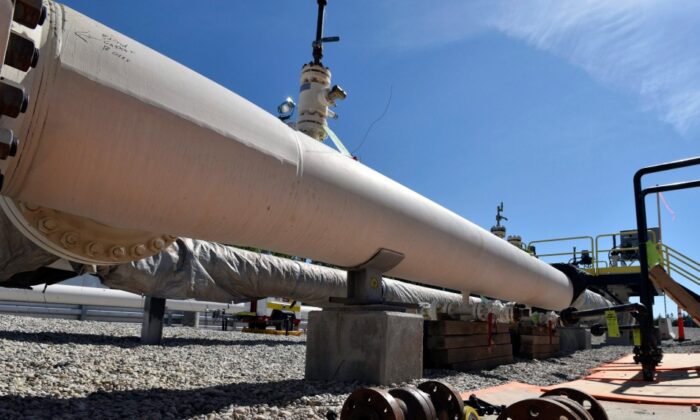 Fresh nuts, bolts and fittings are ready to be added to the east leg of the pipeline near St. Ignace, Mich., on June 8, 2017, as Enbridge prepares to test the east and west sides of the Line 5 pipeline under the Straits of Mackinac in Mackinaw City, Mich. (Dale G Young/Detroit News via AP)
Congress

That measure would compel the Federal Energy Regulatory Commission (FERC) to certify a new regulatory body called the Energy Product Reliability Corporation (ERPO). ERPO is designed to resemble the Energy Reliability Organization (ERO), with which FERC oversees the electrical grid.

ERPO would develop and enforce reliability standards for energy pipelines, including natural gas pipelines, hydrogen pipelines, and petroleum pipelines. The legislation charges FERC with approving or disapproving those standards. In particular, ERPO would be required to establish standards on physical security, cybersecurity, and the maintenance of reliable electricity generation.

The measure comes half a year after the Keystone XL pipeline was canceled following the denial of a key permit by the Biden administration. The Line 5 pipeline connecting Michigan and Canada, which Michigan Gov. Gretchen Whitmer has attempted to shut down, has also drawn controversy, though the White House claimed in November 2021 that it had no plans to close it down.

One was Richard Glick, who previously served as general counsel for Senate Energy and Natural Resources Committee Democrats and government affairs director for Berkshire Hathaway’s PacifiCorp. Glick was elevated to FERC chair by President Joe Biden after being appointed to the FERC by President Donald Trump.

Deputy Secretary of Energy David Turk also testified during the hearing. Turk started his career on Capitol Hill working for then-Sen. Kent Conrad (D-N.D.) and later, then-Sen. Biden (D-Del.) before serving in a range of roles under President Barack Obama.

Rush said his measure would help prevent the issues with natural gas delivery that occurred during the February 2021 winter storm in Texas, saying it would mirror current regulations on electricity delivery.

“All Americans deserve access to reliable energy, and they need to know that the pipelines that deliver that energy are dependable,” Rush said in his opening statement.

“Everyone knows energy prices are the number one issue right now—the highest prices in seven years—yet the majority has not scheduled a hearing,” he said.

Upton said representatives should instead work to approve his own legislation, H.R. 3078, or the “Pipeline and LNG Facility Cybersecurity Preparedness Act.” Like Rush’s measure, it drew inspiration from the May 2021 Colonial Pipeline cyberattack, which limited access to gasoline for many Americans.

For Yes or No Questions, Yes or No Answers Uncommon

Glick and Turk were questioned by representatives, at times drawing criticism from them for not answering yes or no questions with either a “yes” or a “no.”

Claims that some in the Biden administration may be pursuing a ban on LNG exports were a point of uncertainty during the hearing. Upton asked Turk to clarify whether such a ban was being considered.

“We have been looking at the full range of tools that we’ve got in our toolbelt,” Turk said.

“An export ban, either on the LNG side or on the oil side, is not something we’re currently discussing and under consideration,” Turk replied.

Rep. Bill Johnson (R-Ohio) asked Turk if he agreed with a recent statement from his superior, Energy Secretary Jennifer Granholm, that “pipe is the best way to go” when it comes to moving fuel. As Turk began to elaborate, Johnson interrupted: “It’s a yes or no answer.”

“Yes, there are standards—” Turk began before being interrupted by Johnson.

“I don’t know about you, Mr. deputy secretary, but I do agree that pipe is the best way to go,” Johnson said.

Rep. Tim Walberg (R-Mich.) pressed Turk on a topic key to the Line 5 pipeline in his home state, asking him if he supported pipeline construction between the United States and Canada.

“I think we should be clear on this—it’s not the pipeline issue that’s caused the current affordability challenge that we have,” Turk began before being interrupted by Walberg.

“I’m not asking you that,” Walberg said. “I’m amazed that Secretary Granholm, having been in front of us before, last year, and asking questions about Keystone pipeline and Line 5 pipeline as well, that you weren’t prepped to respond to questions that you knew we would ask.”

“I’m stuck somewhere between perplexed and confused and ashamed at how unwilling you are to give a straight answer to a straight question,” Palmer said.

Rep. Jerry McNerney (D-Calif.) received a crisper answer to his yes or no question: “Does climate change and the associated extreme weather events pose a risk to the reliable delivery of energy products like oil and natural gas? Please answer yes or no.”

“Yes it does, congressman,” Glick replied.

Glick told Rep. David McKinley (R-W.Va.) that New England’s reliance on natural gas imports rather than gas from domestic pipelines is “in large part … due to the fact that there hasn’t been enough demand to bring in new pipeline development.”

Yet some energy experts think political factors have made it challenging or even impossible to build new energy pipelines in that region.

Isaac Orr, a policy fellow at the Center for the American Experiment, told The Epoch Times: “You can’t build a pipeline from Pennsylvania, which is one of the top energy-producing states in the country, to Massachusetts, where they need it. So they’re importing LNG, liquefied natural gas, from Trinidad and Tobago.”