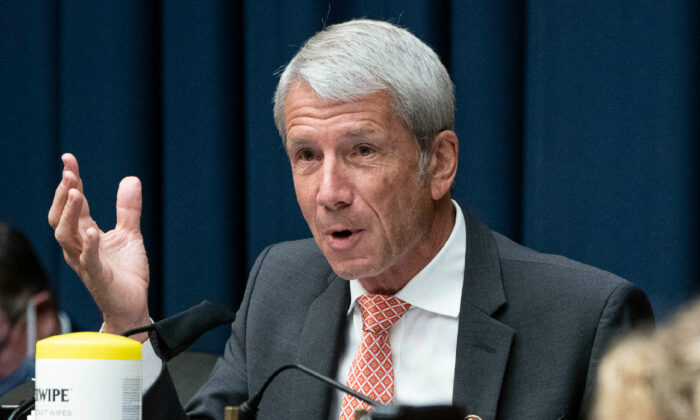 “We don’t always agree, but when it has mattered most, Kurt has been there for me,” Biden said in a statement released by the Schrader campaign on April 23. “And in doing so, he has helped to pass much of my agenda into law—making a huge difference in the lives of the Oregonians he represents and all of America.”

Schrader is one of the House Democratic caucus’ most moderate members and has voted against several of Biden’s priorities in the past, including raising the minimum wage to $15 an hour, and a money-saving proposal to allow Medicare to negotiate the price it pays for prescription drugs during a markup in the House Energy and Commerce Committee.

He also initially opposed the American Rescue Plan but later voted for it.

“Kurt Schrader has had my back from early on and played an important part in the progress we have made as a nation,” Biden said in his statement endorsing the Democrat on Saturday. “That’s why I’m proud to endorse Kurt in his reelection campaign for Congress.”

Schrader is facing progressive candidate Jamie McLeod-Skinner for Oregon’s 5th Congressional District—which represents the northwest part of the state and includes coastal communities and the state capital, Salem—in the recently redrawn 5th District in the May 17 primary.

A farmer and a veterinarian by profession, Schrader is seeking an eighth term.

However, he has faced mounting criticism from progressive Democrats, Oregon Public Broadcasting reported, and some local Democratic party organizations have backed McLeod-Skinner, in some cases changing their rules to endorse her.

He was also criticized for reportedly likening an attempt to impeach former President Donald Trump following the Jan. 6, 2021, U.S Capitol breach to a “lynching,” according to reports from ABC News.

Schrader later apologized for the remark and voted to impeach Trump.

Most recently, a private watchdog group, the Foundation for Accountability and Civic Trust (FACT) filed a complaint with the House Ethics Committee alleging that Schrader violated congressional rules against using tax-paid official resources in his reelection campaign.

McLeod-Skinner said on Twitter on April 24 that while she respects Biden’s work to “tackle Covid-19 & rebuild our economy” she disagrees with his decision to back Schrader.

“Schrader took over $1 million from Big Pharma & other corporate donors—and then voted against Oregonians. We need a leader in Congress who will finally fight for us,” she wrote.

Schrader on Saturday said he appreciated Biden’s “confidence and support for my re-election.”

“I look forward to continuing to work with the President on lowering the high cost of prescription drugs, addressing the high cost of housing and childcare, and tackling climate change and the wildfires that have devastated our community,” Schrader said.