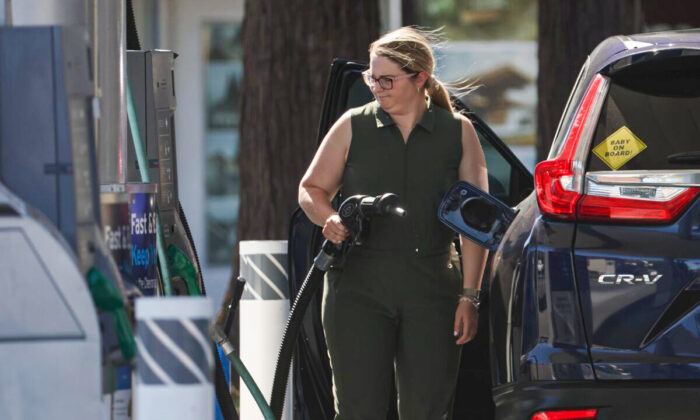 A customer prepares to pump gas into her car at a Chevron gas station in San Rafael, Calif., on May 20, 2022. (Justin Sullivan/Getty Images)
By Jack Phillips

The head of a U.S. oil industry association warned that the Biden administration is wantonly draining the U.S. Strategic Petroleum Reserve in a bid to keep Democrats afloat ahead of the 2022 midterms.

“This is the first time in history, honestly, that the Strategic Petroleum Reserve has been used as a campaign credit card to buy down political risk for the midterms,” Tim Stewart, the head of the U.S. Oil and Gas Association, said in a recent interview with Just the News.

“Let me put it in perspective if I could,” Stewart said. “At the current rate, the U.S. is selling more oil out of its emergency reserves than the production of most medium-sized OPEC countries like Algeria or Angola.”

“We’re selling twice as much per day than we’re producing out of Alaska. That puts us somewhere between Exxon and Conoco in terms of … the impact we’re having on the daily supply—and this is happening without new oil going in to replace it.”

President Joe Biden in March set a plan to release 1 million barrels per day over six months from the SPR to tackle high U.S. fuel prices, which have contributed to soaring inflation.

“The scale of this release is unprecedented: the world has never had a release of oil reserves at this 1 million per day rate for this length of time,” the White House said at the time. “This record release will provide a historic amount of supply to serve as bridge until the end of the year when domestic production ramps up.”

The Biden administration is weighing the need for further Strategic Petroleum releases after the current program ends in October, Energy Secretary Jennifer Granholm told Reuters this month. A Department of Energy spokesperson later said the White House at that time was not considering new releases beyond the 180 million barrels.

The Energy Department also has proposed to replenish the reserve by allowing it to enter contracts to purchase oil in future years at fixed, preset prices. The administration said it believes the plan would help boost domestic oil production.

Data from the American Automobile Association (AAA) shows that gas prices have increased in the past week. As of Wednesday, the price for a gallon of regular gas is about $3.76 nationwide, up from $3.68 a week ago. In California, the average price is around $6 per gallon.

The Epoch Times has contacted the White House press office for comment.