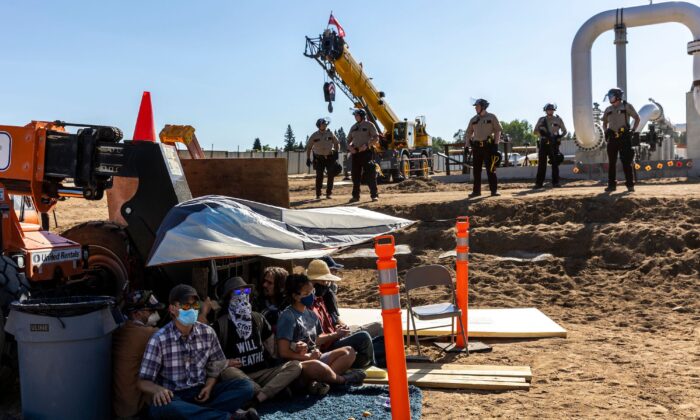 Environmental activists stage a sit-in in front of construction equipment as police stand by, at the Line 3 pipeline pumping station near Itasca State Park, Minn. on June 7, 2021. (Kerem Yucel/Getty Images)
US News

The Biden administration has backed the validity of a Trump-era environmental assessment and subsequent approval of a controversial Minnesota pipeline project that environmental groups are suing to block.

In a 65-page legal brief filed on June 23 (pdf), the Department of Justice (DOJ) argued that the U.S. Army Corps of Engineers’ 2020 approval of Enbridge Inc.’s Line 3 oil pipeline met its legal obligation to assess the project’s environmental impacts and considered “all of the issues to which Plaintiffs draw special attention,” such as the project’s effects on climate, tribal hunting and fishing rights, and low-income and minority populations.

Jean E. Williams, Acting Assistant Attorney General of the DOJ’s Environment and Natural Resources Division, recommended in the filing that “the Court should reject Plaintiffs’ arguments and enter summary judgment in favor of Federal Defendants,” in the case the U.S. Army Corps of Engineers

The Plaintiffs—including the White Earth Band of Ojibwe, the Red Lake Band of Chippewa, Honor the Earth, and the Sierra Club—had challenged the Corps’s review and approval process as “arbitrary and capricious,” a claim Williams rejected in the filing.

Williams argued that, in addition to the Corps meeting its obligations under the National Environmental Policy Act (NEPA), it also “considered a reasonable range of alternatives, before incorporating important protections for wetlands, wild rice, and cultural resources” as part of its Line 3 pipeline permit.

“This decision is based on balancing development with protecting the environment,” Col. Karl Jansen, St. Paul District commander, said in a statement at the time. “Our decision follows an exhaustive review of the application and the potential impacts associated with the construction of the pipeline within federally protected waters.”

Opponents of the project criticized the DOJ’s decision to urge the court to rule in favor of the defendants.

“Allowing Line 3 to move forward is, at best, inconsistent with the bold promises on climate and environmental justice President Biden campaigned and was elected on,” Sierra Club Executive Director Michael Brune said in a statement.

“The president must listen to frontline communities, defend the right of all people to clean water and a healthy climate, and act immediately to shut down this dirty tar sands pipeline.”

Environmental and indigenous groups opposed to Line 3 have staged numerous protests, some of which have led to arrests.

The DOJ said that around 90 percent of the Line 3 replacement pipeline route will be co-located with other pipelines, utilities, roads, and railroads, and has been routed to avoid sensitive areas.

The Corps’s assessment found that a large majority of wetland impacts from the Line 3 pipeline will be temporary and that “mitigation will be performed to compensate for the small amount of loss of aquatic resource function,” according to the DOJ.

Mike Sommers, CEO of the American Petroleum Institute, the largest U.S. trade association for the oil and natural gas industry, said in a June 23 statement on Twitter that Line 3 “is an important conduit between energy-producing regions and U.S. fuel refineries in the Midwest and along the East Coast.”

“This project supports nearly 5,000 jobs and delivers access to essential energy,” he said.