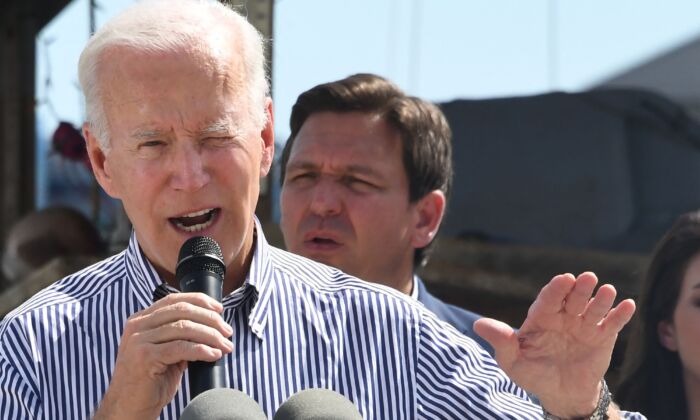 President Joe Biden attributed deadly Hurricane Ian to climate change and suggested people “should do something about it,” despite such a conclusion going against the nation’s top hurricane expert.

Biden traveled on Oct. 5 to Florida to survey the devastation of hurricane-ravaged Florida and meet those who had lost homes and businesses. While the president put up a rare united front with Gov. Ron DeSantis in the wake of the Category 4 storm, as the two toured the damage and praised each other for collaboration, Biden opened his remarks by underscoring climate change.

“We’re in a situation where the Colorado River looks more like a stream,” Biden said during his Wednesday speech in Fort Myers Beach, a hard-hit town in southwest Florida during the Ian landfall, as DeSantis stood behind him.

“There’s a lot going on, and I think the one thing this has finally ended is a discussion about whether or not there’s climate change and we should do something about it,” the president continued.

When Hurricane Ian, described by DeSantis as a “500-year flood event,” slammed into the state last week and caused widespread destruction, flooding, and power outages to coastal communities, it spurred a bevy of Liberals and left-wing media outlets to push hard the climate agenda, asserting that carbon emissions and global warming have intensified hurricanes.

Biden administration’s top hurricane expert, however, has rebuked such claims due to lack of evidence.

“I don’t think you can link climate change to any one event,” Jamie Rhome, the acting director of the National Oceanic and Atmospheric Administration’s (NOAA) National Hurricane Center, told CNN during a Sept. 27 interview, after being pressed about how climate change had contributed to the storm and its “rapid intensification.”

“On the whole, on the cumulative, climate change may be making storms worse. But to link it to any one event, I would caution against that,” Rhome added.

NOAA recently released a study with similar conclusions, saying “it is premature to conclude with high confidence that human-caused increases in greenhouse gases” have impacted hurricane activity in the Atlantic.

“After adjusting for a likely under-count of hurricanes in the pre-satellite era there is essentially no long-term trend in hurricane counts,” according to the federal agency.

Michael Shellenberger, the founder and president of Environmental Progress and author of “The Death of Environmentalism,” pushed back the long-term trend of increasing hurricane intensity at CPAC Australia, known as the Conservative Political Action Conference, in Sydney.

“The best available science predicts that there will be a 25 percent decline in hurricane frequency in the future, even alongside a five percent increase in intensity, which we are not seeing at this point,” the California-based environmentalist said on Oct. 1.

As part of his Wednesday remarks, Biden stressed the amount of federal help Florida will receive for storm aid and as part of Democrat-backed spending, including $13 billion over the next five years for highways and bridges.

The death toll from Hurricane Ian has climbed past 100, while nearly 400,000 homes and businesses remained without power in Florida as of Oct. 4.