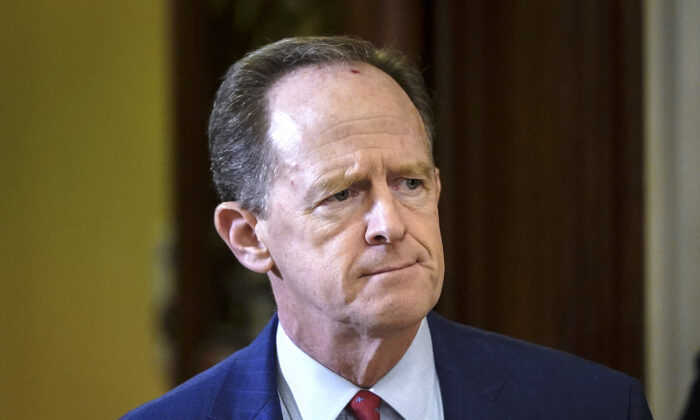 President Joe Biden’s nominee for comptroller is facing opposition because of works she’s penned, including a thesis on Marxism.

Biden announced last month he was choosing Saule Omarova for the post of currency comptroller at the Treasury Department.

The White House described Omarova as “one of the country’s leading academic experts on issues related to regulation of systemic risk and structural trends in financial markets.”

But the Cornell University law professor is facing renewed opposition from Sen. Pat Toomey (R-Pa.), who called on Wednesday for Omarova to provide a copy of her Russian-language thesis.

The paper, titled “Karl Marx’s Economic Analysis and the Theory of Revolution in The Capital,” was written while Omarova was studying at Moscow State University.

Toomey, the top Republican on the Senate Banking Committee, said the paper recently disappeared from her resume.

“While it appears that you have deleted any reference to your thesis in the version of your curriculum vitae (CV) that is currently available on the Cornell Law School website, the paper appeared on your CV as recently as April 2017,” Ranking Member Toomey wrote in a letter to the nominee requesting the thesis, noting that nominees are required to submit all published writings, articles, and papers.

Expanding on his opposition on the Senate floor, Toomey said Omarova “has been celebrated on the far left for promoting ideas that she herself has described as ‘radical.'”

In a paper (pdf) she penned last year, for instance, Omarova said she was offering “a blueprint for radically reshaping the basic architecture and dynamics of modern finance.” In it, she said her proposal would “effectively ‘end banking’ as we know it.”

“What she was arguing for in this paper from just last year was really promoting the naturalization of an entire industry, retail banking, basically bring to an end the ability of banks to compete for customers’ services and instead nationalize that. A clear socialist idea—that we shouldn’t have free enterprise system competing for people’s business, but rather have the government own it and provide that,” Toomey said.

Socialism is often described as the precursor to communism or Marxism.

Toomey said it did not surprise him that some people in the United States would compare the Soviet Union to America but he didn’t think that a person who thought that way would be nominated to such a powerful post.

The White House and Omarova did not respond to a request for comment.

Some Democrats have said they support the nomination.

“Saule Omarova has spent her career working with both Republicans and Democrats on systemic financial stability issues and is well-versed in new financial technologies. Her experience as a policymaker, in the private sector, and in academia will allow her to work with stakeholders across our financial system to ensure the economy works for everyone, and to protect our economic recovery from the risky activities of Wall Street and other bad actors,” Sen. Sherrod Brown (D-Ohio) said last month. “I call on my colleagues on the Banking and Housing Committee to support this historic nominee to this position critical to our economy.”