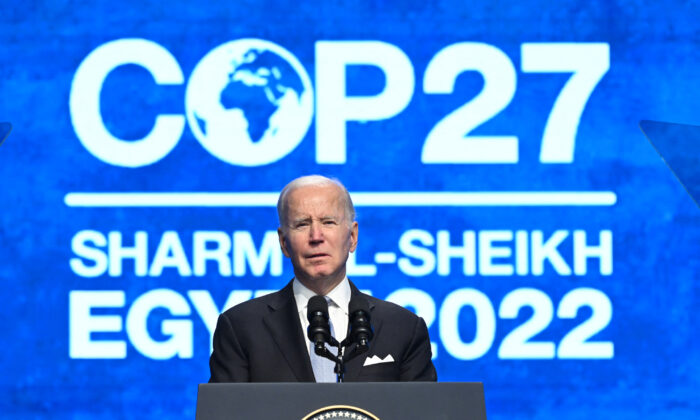 President Joe Biden delivers a speech during the COP27 summit in the Red Sea resort city of Sharm el-Sheikh, Egypt, on Nov. 11, 2022. (SAUL LOEB/AFP via Getty Images)
By Naveen Athrappully

President Joe Biden announced increased investments in countries and projects related to climate change in an effort to adhere to global climate targets, while declaring steps to limit methane emissions within the country in remarks given at the 27th Conference of the Parties to the UN Framework Convention on Climate Change (COP27).

“Today as a downpayment we’re announcing a $150 million in initiatives that specifically support adaptation efforts throughout Africa,” Biden said in his speech in Sharm El-Sheik, Egypt, on Nov. 11. “Alongside the European Union and Germany, a $500 million package to finance and facilitate Egypt’s transition to clean energy [will] enable Egypt to deploy 10 gigawatts of renewable energy by 2030 while bringing offline 5 gigawatts of inefficient gas-powered facilities reducing emission in Egypt’s power sector by 10 percent.”

Besides that, Biden announced another project underway “between American firms and the government of Angola to invest $2 billion building new solar projects” in the country.

He reiterated his commitment to climate change projects, and said that “the science is devastatingly clear. We have to make vital progress by the end of this decade.” The global methane pledge was part of the efforts, and started with the European Union and eight other countries, which has now grown to more than 130 countries “covering more than half of the global methane emissions.”

“Methane is 80 percent more potent than carbon dioxide, and it accounts for nearly half of the net warming we’re experiencing now, so cutting methane by at least 30 percent by 2030 can be our best chance to keep within reach of 1.5 degree celsius target.”

Biden said that a methane emissions-reduction plan will be released today that lays out how United States is committed to meeting the pledge.

“We’re investing more than $20 billion and domestic methane mitigation to do things like [capping] wells leaking methane, improving industrial equipment in the oil and gas sectors … [introducing] strong regulatory actions, including new proposals from our Environmental Protection Agency, to strengthen standards on methane across sectors especially from super emitters.”

According to the president, these steps will reduce U.S. methane emission from various sources by 97 percent below the levels of 2005 by 2030.

Biden claimed that, “according to the world meteorological organization, the past eight years have been the warmest on record.”

“In the United States, you’re seeing historic droughts, wildfires in the West, devastating hurricanes and storms in the East.”

As for Africa, “home to many nations considered to be most vulnerable to climate change,” there was food insecurity, droughts, and floods spanning the continent.

Biden said that his administration’s Inflation Reduction Act, which included “the biggest climate bill in the history of the country,” will give “$368 billion to support clean electricity for everything from onshore, offshore wind to distributed solar, zero emission vehicles, and sustainable aviation fuels.”

“The new law will reduce emissions in the United States by about 1 billion tons in 2030 while unleashing a new era of clean energy-powered economic growth.”

Biden also said that his administration is requiring government suppliers to disclose their commitment to climate change initiatives “and set targets for themselves that are aligned with the Paris agreement.”

“Thanks to the actions we’ve taken, I can stand here as president … and say with confidence that the United States of America will meet our emissions target by 2030.”

He also called on Russia to stop using “energy as a weapon and holding the global economy hostage.”

The Biden administration is pushing forward efforts to reduce methane emissions, mainly focusing on the oil and gas industry.

The new rules on emission is expected to be announced Friday, which follows up on commitments given at the UN climate change summit in Glasgow, Scotland.

According to the Associated Press, the latest regulations take aim at all drilling sites, including smaller wells that emit less than 3 tons (2.7 metric tonnes) of methane per year. Small wells are rarely inspected for leaks.

Oil and gas firms want the Biden administration to make small wells exempt from rules aimed at controlling methane emissions, arguing that such measures are unnecessary for the segment.

The industry claims that the smaller wells produce an insignificant amount of methane and usually run on small margins. Forcing oil and gas companies to follow stringent rules of the proposal could turn them unprofitable.