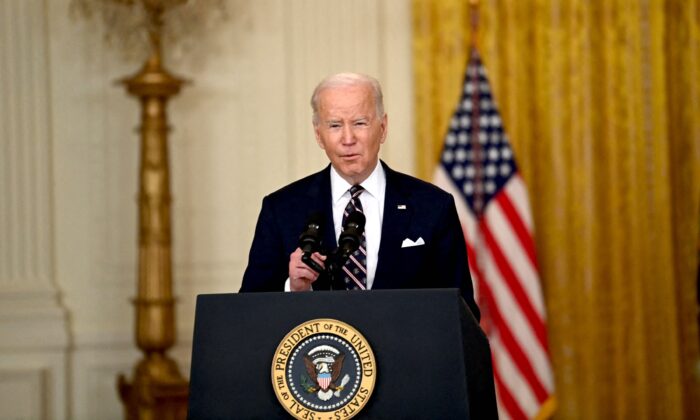 President Joe Biden speaks in the East Room of the White House about Russian military activity near Ukraine, on Feb. 22, 2022. (Brendan Smialowski/AFP via Getty Images)
Europe

President Joe Biden has said that the United States will impose sanctions on Russia “far beyond” the ones that it imposed in 2014 following the Russian annexation of the Crimean peninsula.

“This is the beginning of a Russian invasion of Ukraine,” Biden said in a Feb. 22 White House speech, signaling a shift in his administration’s position. “We will continue to escalate sanctions if Russia escalates.”

Russian elites and their family members will also soon face sanctions, he said, adding that “Russia will pay an even steeper price” if Moscow decides to push into Ukraine. Two Russian banks and Russian sovereign debt will also be sanctioned.

Also in his speech, Biden said he would send more U.S. troops to the Baltic states—Estonia, Latvia, and Lithuania—as a defensive measure to strengthen NATO’s position in the area. Russia shares a border with the Baltic states.

A day earlier, Russian President Vladimir Putin ordered troops to go into the separatist Donetsk and Luhansk regions in eastern Ukraine after a lengthy speech in which he recognized the two regions’ independence. Western powers decried the move and began to levy sanctions on certain Russian individuals, while Germany announced that it would halt plans to move forward with the Russia-to-Germany Nord Stream 2 pipeline.

In the United States, Biden is facing bipartisan pressure to take more extensive actions against Russia following Putin’s decision. However, a recent poll showed that a majority of Americans believes sending troops to Ukraine is a “bad idea,” while a slim minority believes it’s a good one.

Earlier on Feb. 22, Borell said Russian troops have already entered the Donbas region, which makes up Donetsk and Luhansk, which have been under the control of pro-Russia groups since 2014.

Also on Feb. 22, the Russian Parliament approved a Putin-backed plan to use military force outside Russia’s borders as Putin confirmed that Russia would recognize the expanded borders of Luhansk and Donetsk.

“We recognized the states,” he said. “That means we recognized all of their fundamental documents, including the constitution, where it is written that their [borders] are the territories at the time the two regions were part of Ukraine.”

Speaking to reporters on Feb. 22, Putin said Ukraine is “not interested in peaceful solutions” and that “every day, they are amassing troops in the Donbas.”

Ukraine President Volodymyr Zelensky again downplayed on Feb. 22 the prospect of a Russian invasion and proclaimed that “there will be no war.”

“There will not be an all-out war against Ukraine, and there will not be a broad escalation from Russia. If there is, then we will put Ukraine on a war footing,” Zelensky said in a televised address.

The White House began to signal that it would shift its own position on whether it’s the start of an invasion.

“We think this is, yes, the beginning of an invasion, Russia’s latest invasion into Ukraine,” said Jon Finer, the White House deputy national security adviser in public remarks. “An invasion is an invasion, and that is what is underway.”

For weeks, Western governments have been claiming Moscow would invade its neighbor after Russia gathered roughly 150,000 troops along the countries’ shared borders. They alleged that the Kremlin would attempt to come up with a pretext to attack, while some officials on Feb. 21 said Putin’s speech recognizing the two regions was just that.

Defense Secretary Lloyd Austin told reporters on Feb. 22 that Russia’s “latest invasion” of Ukraine was threatening stability in the region, but he said Putin can “still avoid a full-blown, tragic war of choice.”