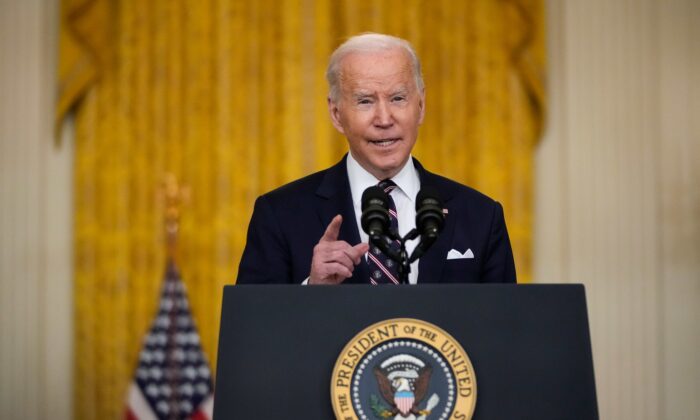 U.S. President Joe Biden delivers remarks on developments in Ukraine and Russia, and announces sanctions against Russia, from the East Room of the White House in Washington on Feb. 22, 2022. (Drew Angerer/Getty Images)
Executive Branch

President Joe Biden announced additional sanctions and export restrictions against Russia Thursday in response to a Russian attack against Ukraine launched in the early hours that morning.

In a televised address on Feb. 24, Biden vowed to impose new sanctions against four additional Russian banks as well as additional members of Moscow’s elite inner circle and cut off “half” of Russia’s high-tech imports.

“America stands up to bullies. We stand up for freedom,” said Biden. “This is who we are.”

Biden’s speech came after a meeting with the National Security Council and a virtual summit with G7 leaders. And he said the sanctions are in coordination with a list of countries representing more than half of the world’s economy.

Biden pledged humanitarian support to the people of Ukraine and reiterated the U.S. commitment to defend NATO territory. He also said again that the United States will not send troops to fight in Ukraine.

Russian President Vladimir Putin announced a “special military operation” on Feb. 24 to defend Moscow against what he alleged were threats from Ukraine. Shortly after Putin’s announcement, Russia launched its attack by land, air, and sea.

This came after months of Russian troop buildup along Ukraine’s border.

Ukraine’s leadership said at least 40 people had been killed so far in what it called a “full-scale war,” with multiple cities and bases targeted with airstrikes or shelling from the east, north, and south.

And an adviser to the Ukrainian presidential office, Mykhailo Podolyak, said Thursday the Chernobyl nuclear power plant has been captured by Russian forces.

Biden’s latest action comes in addition to the United States’ first tranche of sanctions against Russia taken earlier in the week. These include sanctions against two regions within Ukraine declared independent by Russia, state-owned Russian banks, individual Russian oligarchs and their families, as well as sanctions against the company behind the construction of the Nord Stream 2 pipeline connecting Russia to Germany.

The first tranche was announced in response to Putin’s move Feb. 21 to declare two regions within Ukraine to be independent and then sign a decree authorizing “peacekeeping” troops to move into the two breakaway regions

Biden has acknowledged that Americans will likely see increased costs at the gas pump as a result of the sanctions against Russia but has pledged that his administration is using “every tool at our disposal” to limit the effect on gas prices.