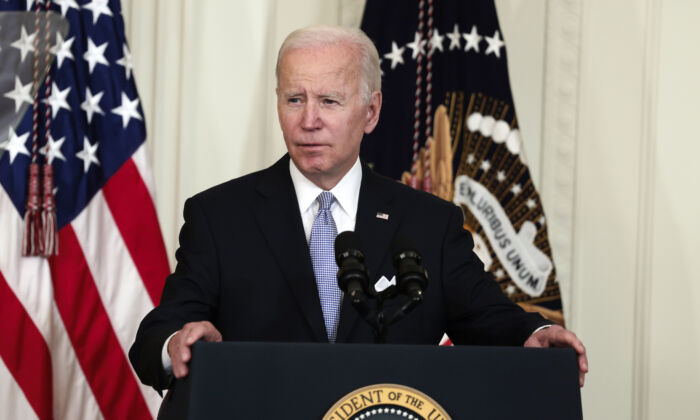 President Joe Biden gives remarks at an executive order signing event for police reform in the East Room of the White House in Washington, on May 25, 2022. (Anna Moneymaker/Getty Images)
Taiwan

President Joe Biden’s repeated pledges that the United States would come to Taiwan’s defense in the case of a Chinese attack—only for White House officials to walk back on his statements each time—gives off the impression to America’s adversaries that the Biden administration “doesn’t have its act together,” said one analyst.

On May 23, Biden said that Washington had a “commitment” to militarily defend Taiwan from invasion—breaking from the United States’ long-standing policy of strategic deterrence under which the administration is deliberately vague on what it would do in such a scenario. This is the third time he has made such a statement since August 2021. Each time, administration officials confirmed later that U.S. policy had not changed.

“It does create this appearance of confusion,” Grant Newsham, a senior fellow with the Center for Security Policy, recently told Epoch TV’s “China Insider” program.

“It does not create the appearance of an administration that really knows what it’s doing, or has its policy set,” he added.

The Chinese regime considers self-ruled Taiwan to be part of its territory to be taken by force, if necessary. The United States, meanwhile, is Taiwan’s largest arms supplier and is bound to provide the island with the means to defend itself under the Taiwan Relations Act.

James Fannell, a former director of intelligence and information operations for the U.S. Pacific Fleet, agreed, saying that Washington appears to want to have it both ways.

“Now this Biden administration seems to be trying to edge towards saying that we’re going to be more clear about our position on Taiwan, but they don’t want to give up saying that they’re done with the policy of strategic ambiguity,” he told China Insider.

Yet this approach is “very dangerous,” Fannell added.

Fannell referred to China and Russia’s recent joint air force drills in the Sea of Japan, the East China Sea, and the western Pacific as leaders of the Quad grouping—Australia, Japan, United States, and India—met in Tokyo. The exercise, he said, was to send a strategic warning to the Quad, particularly Japan and the United States—those who could get involved with defending Taiwan.

The White House did not return a request for comment.

Shifting Away From Strategic Ambiguity

Given this backdrop, both experts urged that the United States should move away from its policy of strategic ambiguity towards Taiwan, and reinforce its support to help the island counter the regime.

Fanell pointed out that the Chinese regime no longer sticks to terms stipulated in Taiwan Relations Act, the legislation passed by the U.S. lawmakers back in 1979, which state that in exchange for the United States diplomatically recognizing the People’s Republic of China, the Taiwan issue has to be resolved peacefully.

“It’s China that’s walked away from the agreements. And so we shouldn’t feel beholden to a policy of strategic ambiguity that was built 50 years ago, when everything’s changed on the ground,” he said.

Newsham echoed Fanell’s view, saying “China has long since made it clear that they are going for a violent resolution if they have to. It makes everything else inoperable in this agreement.”

Fanell emphasized that the United States should ramp up enhancing the island nation’s military capabilities by “arming it to the teeth.”

“If we don’t do that, the images that we’re seeing in Ukraine: dead babies, murdered women, and burned-out buildings and destruction, all of that will occur in Taiwan,” he said.