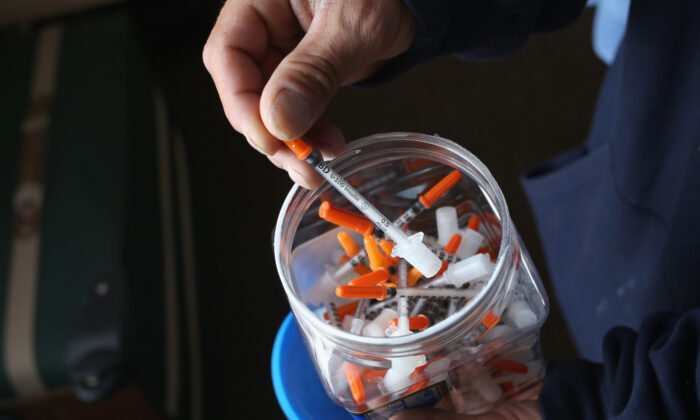 President Joe Biden should change his name to “President Woke.” In the newest example of his administration’s hard-left governing philosophy, it had planned to offer nonprofits federal grants to give drug paraphernalia to addicts, an idea that goes under the name “harm reduction.”

The plan was exposed by conservative media outlet The Washington Free Beacon, when journalist Patrick Hauf discovered the existence of a $30 million grant program (pdf) to “support community-based overdose prevention programs, syringe services programs, and other harm reduction services.” The announcement seeking applications listed the things the grant money would pay for, including “safe smoking kits/supplies.”

“These kits will provide pipes for users to smoke crack cocaine, crystal methamphetamine, and any illicit substance,” a spokesman for the Department of Health and Human Services (HHS) told Hauf.

In other words, your tax money would have been used to help the addicted to satisfy their cravings with some of the worst and most dangerously addictive drugs money can buy.

When the Free Beacon’s report was amplified by other conservative media outlets, the untreated sewage really hit the fan. When asked about the crack pipe giveaway plan at a White House press briefing, press secretary Jen Psaki dissembled.

“They were never a part of the kit,” Psaki said. “It was inaccurate reporting.”

Oh really? Then why did HHS Secretary Xavier Becerra feel the need to follow up with a statement promising that “no federal funding will be used directly or through subsequent reimbursement of grantees to put pipes in safe smoking kits.” Instead, he assured the public that our taxes will pay for “clean syringes,” “safe sex kits,” and “substance test kits, including test strips for fentanyl,” as well as wound care management supplies and vaccinations against hepatitis.

Swell. Even if Becerra is telling the truth, some of that isn’t much better. Giving syringes away leads to greater drug use and neighborhood degradation. I’m all for wound care supplies and vaccinations. But what does that say about the sad lives of the people receiving the supplies? Addicted people need structured rehabilitation and focused encouragement to clean up their lives much more than they need safe sex kits.

The retreat was viewed as especially bad news by the Drug Policy Alliance, an advocacy group that supports decriminalizing the possession of hard drugs and promotes the so-called harm reduction approach to addiction. It released an angry statement decrying the HHS promise that it “will no longer be allowing federal funding to go towards putting pipes in safer smoking supplies.” In other words, Psaki’s mendacity (or cluelessness) aside, it was always intended that the grant program would pay for crack pipes—and it would have but for the Free Beacon’s reporting.

That’s the good news. But such dissipation enabling programs continue at the local level. Moreover, “harm reduction” initiatives usually don’t represent the ceiling of enablement, but the launching pad for ever-more extreme facilitation of destructive behaviors.

Take the HIV-preventative plan that San Francisco pioneered in the 1990s known as “needle exchange.” The idea seemed sound enough. The then-raging HIV epidemic was spread, in part, by addicts sharing needles. To prevent this form of transmission, the exchange program allowed those who took injection drugs to obtain clean needles without cost—but it also required something in return. To get new needles, users had to exchange their used supply, needle-for-needle.

Fast forward several years and the “exchange” part of the needle supply line had morphed into a giveaway service in which anyone could obtain free hypodermic syringes without question or the responsibility of handing over their used supply. As a direct consequence, the streets of San Francisco became littered with used needles and human feces, including in parks where children play. And it surely worsened the homeless crisis afflicting San Francisco. Once a world-class city, it’s now a filthy mess where homeless people have flocked because they know that their dysfunctional lives will be facilitated and that they can consume addictive drugs without fear of legal consequence.

Indeed, supplying drug paraphernalia to addicts is particularly harmful to the homeless.

“Name me one 12-Step program that encourages people to get high,” said Jim Palmer, president of the Orange County Rescue Mission, an organization dedicated to helping people kick addictions and get off the streets. “Harm reduction doesn’t improve lives. Instead, it lets people who are addicted kill themselves by offering them the means to do it. It’s mind-boggling.”

“We give them the pipes; we give them the needles,” he said. “You are making them believe it is okay to continue in this mode and take drugs—which they often pay for by stealing.”

No wonder some of the very cities offering harm reduction are in the throes of mutually reinforcing homelessness and shoplifting crises.

Here’s the bottom line: Giving addicts the pipes with which to smoke meth or crack and needles for shooting up—and even providing safe spaces in which to get high—doesn’t help people overcome their addictions. Rather, it furthers their disfunction, dissipation, and degeneration in a downward spiral of misery that not only harms the individuals who are addicted, but also degrades the communities in which we all live together.

Wesley J. Smith
Award-winning author Wesley J. Smith is host of the Humanize Podcast (Humanize.today), chairman of the Discovery Institute’s Center on Human Exceptionalism and a consultant to the Patients Rights Council. His latest book is “Culture of Death: The Age of ‘Do Harm’ Medicine.”