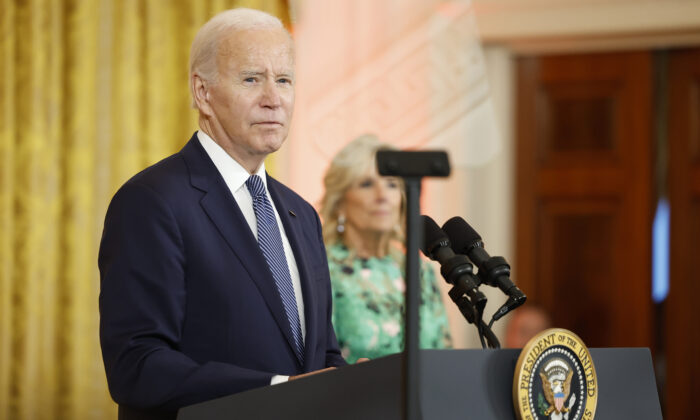 President Joe Biden speaks during a reception at the White House in Washington on Oct. 24, 2022. (Anna Moneymaker/Getty Images)
By Zachary Stieber

President Joe Biden and his administration are launching a renewed campaign to convince Americans to get the new, unproven COVID-19 vaccine boosters, with Biden scheduled to get one on Oct. 25.

The campaign involves a fresh slate of advertisements, pop-up events, and a flurry of emails, the White House said.

The U.S. Department of Health and Human Services (HHS), for instance, will have ads aimed at black and Latino people air in more than 30 markets in English and Spanish across television, radio, and print.

Other ads targeting football and country music fans will run in 15 rural markets and other ads aimed at Asians will air in 25 markets, while the administration is also going online to run ads on social media platforms like Facebook.

“The ads highlight the importance of getting the updated vaccine to protect the ones we love and the protection the updated COVID-19 vaccines offer against Omicron,” the White House said in a statement.

The updated Pfizer and Moderna boosters have only been tested in mice, and there’s no clinical evidence they’ll increase protection against infection or severe illness.

A preprint paper published Monday found that people who received the updated boosters had “similar neutralizing antibody titers” as those who received an old booster.

Despite the lack of data, Dr. Ashish Jha, the White House’s COVID-19 response coordinator, appeared on multiple television programs on Tuesday morning and said people would have protection against hospitalization if they received one of the new shots.

“Those vaccines keep kids, they keep adults out of the hospital,” Jha said on MSNBC’s “Morning Joe.”

HHS is also planning what is called the #VaxUpAmerica Family Vaccine Tour, which will feature pop-up vaccination events at places such as the NASCAR Cup Serious Championship.

The White House and HHS did not respond to requests for how much the efforts will cost.

Biden to Get Booster

Biden planned to get an updated booster later Tuesday and call on Americans to “do their part” to get more people injected, according to the White House.

“Today, the President will call on employers and school leaders to once again do their part to get their communities protected, including by helping people get their updated COVID-19 vaccine ahead of the winter,” the White House said.

“The President will call on every school district, college, and university in America to host at least one vaccination clinic by Thanksgiving. He will also call on employers to take actions like offering paid-time-off for vaccination, and working with local vaccine providers to host on-site vaccination clinics for employees.”

Pharmacies should also work to provide people with vaccinations by expanding hours, the administration said, highlighting how pharmacies in Albertsons, CVS, and Rite Aid stores are offering people financial incentives to get one of the boosters.

Biden has already received multiple boosters and recovered from COVID-19.

Few Americans are heeding the call from the administration as of yet.

Under 20 million people have received one of the boosters as of Oct. 19, according to federal data. People as young as 5 can receive one of the boosters 2 months after their most recent dose. About 209 million Americans were eligible for a new booster as of August.