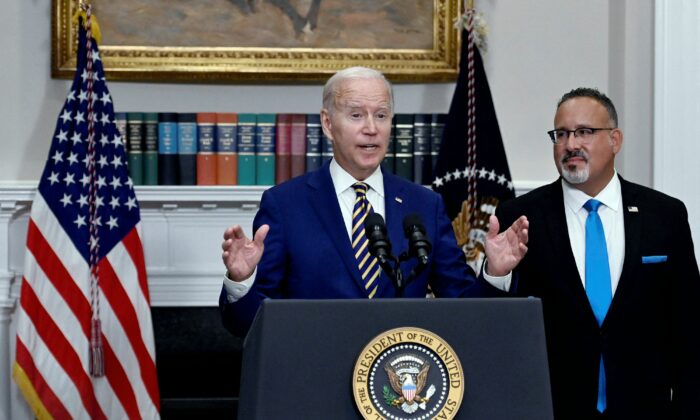 Federal student loan bills were slated to resume on Jan. 1, 2023. Loan payments were placed on hold in early 2020 under the Trump administration, and the moratorium has been extended multiple times.

In a news release issued on Nov. 22, the Department of Education announced it would extend the repayment pause and criticized Republican officials. The moratorium will be extended until 60 days after the Biden administration is allowed to implement the plan and if the lawsuits are resolved.

Earlier this year, President Joe Biden announced a program that would forgive up to $20,000 in federal student loans, although several courts have placed injunctions on the plan. Previously, he said the payment pause won’t be extended again, but that was before courts halted that program.

Some 26 million people already have applied for debt relief, and 16 million were approved, officials have said. The debt forgiveness plan announced in August would cancel $10,000 in student loan debt for those making less than $125,000 or households with less than $250,000 in income. Pell Grant recipients, who typically demonstrate more financial need, would get an additional $10,000 in debt forgiven, for a total of $20,000.

In his news release, Cardona didn’t address arguments put forth in lawsuits against the program. Six Republican-led states wrote in a recent suit that the White House lacks the power to forgive student loan debt due to the Constitution’s separation of powers clause, and by forgiving the debt, it has superseded Congress’s authority.

The states also wrote that they would be financially injured if billions of dollars in student debt were canceled under the program, which was unveiled by Biden just weeks before the Nov. 8 midterm elections. The St. Louis-based U.S. Court of Appeals for the 8th Circuit on Nov. 10 froze the plan, and a federal judge in Texas also struck it down, siding with a lawsuit brought by the Job Creators Network Foundation.

The administration on Nov. 18 filed a lawsuit with the Supreme Court to reinstate its program, arguing that it has the authority to provide debt relief. After the program was announced, Supreme Court Associate Justice Amy Coney Barrett denied two emergency petitions to block it.

“The Eighth Circuit’s erroneous injunction leaves millions of economically vulnerable borrowers in limbo, uncertain about the size of their debt and unable to make financial decisions with an accurate understanding of their future repayment obligations,” U.S. Solicitor General Elizabeth Prelogar, who represents the Biden administration, told the Supreme Court in an appeal (pdf) on Nov. 18.

In temporarily halting the plan, U.S. District Judge Mark Pittman wrote in his order that it isn’t up to him to decide whether the program is “good public policy or not” but stipulated that “no one can plausibly deny that it is either one of the largest delegations of legislative power to the executive branch, or one of the largest exercises of legislative power without congressional authority in the history of the United States.”

Republicans said that the program is likely illegal and would give more power to the Biden administration, arguing that only Congress has the capacity to forgive debt. They’ve also said that it was a brazen attempt to push younger voters to the polls to vote in favor of Democrat candidates during the 2022 midterm elections.

In September, an NBC poll found that 44 percent of respondents viewed the debt relief program as a bad idea while 43 percent believed it was a good idea.