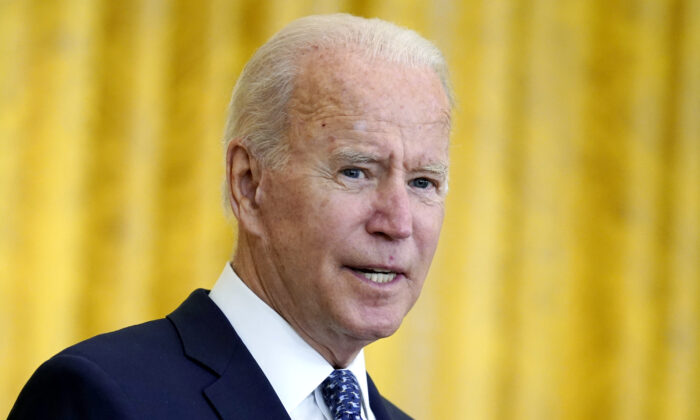 President Joe Biden speaks during an event to celebrate labor unions, in the East Room of the White House on Sept. 8, 2021. (Evan Vucci/AP Photo)
Executive Branch

Biden said the Department of Labor would develop the mandate, centering around a provision that every company with more than 100 employees would need to receive proof of vaccination from each worker or make them get tested for COVID-19 once a week.

A Department of Labor spokesperson told The Epoch Times in an email late Oct. 12 that the Occupational Safety and Health Administration (OSHA), an office within the agency, has been working “expeditiously” to develop the mandate, which it described as an “emergency temporary standard.”

Earlier Tuesday, as part of the regulatory review process, the agency “submitted the initial text of the emergency temporary standard to the Office of Management and Budget,” the spokesperson added.

Once the office concludes its review, the mandate will be published in the Federal Register. The public can view it and submit comments about it.

The submission is the first concrete step the administration has taken since Biden made his announcement on Sept. 9, leaving many business owners stunned.

“The bottom line: We’re going to protect vaccinated workers from unvaccinated co-workers. We’re going to reduce the spread of COVID-19 by increasing the share of the workforce that is vaccinated in businesses all across America,” Biden said from the White House.

The White House had said previously it wouldn’t support forcing Americans to carry proof of vaccination but has since ordered federal workers to get a vaccine before announcing a private company mandate.

The mandate has drawn significant pushback, with state-level officials in over half the states promising to fight it once it’s unveiled.

“The reality is, the president of the United States cannot just make up laws. That’s outside of his purview, outside of his constitutional role. The executive branch implements laws … that’s their job,” Texas Attorney General Ken Paxton, a Republican, said on EpochTV’s “Crossroads” last month.

“That’s not the way the Constitution works, so we are pretty sure what he’s doing will be unconstitutional, if it is what he said when he made the statement. So obviously, that would be for our first line of attack, just to say, ‘Look, you didn’t have the authority to do this,'” he added.

Many companies have expressed displeasure with the prospect of a mandate, though some have indicated support for the pending rule.

The White House has said the Occupational Safety and Health Act of 1970 grants the Department of Labor office the authority to impose a mandate.

“I would say that requiring and mandating for businesses of 100 people or over vaccines is not a small task. That is a big bold proposal idea and something that we want to implement with as much clarity as we can,” White House press secretary Jen Psaki told reporters on Tuesday. “We know there will be questions, even after these rules are put out, we understand that. But that’s why we wanted to take a little bit of time, not too much time, to get it done.”