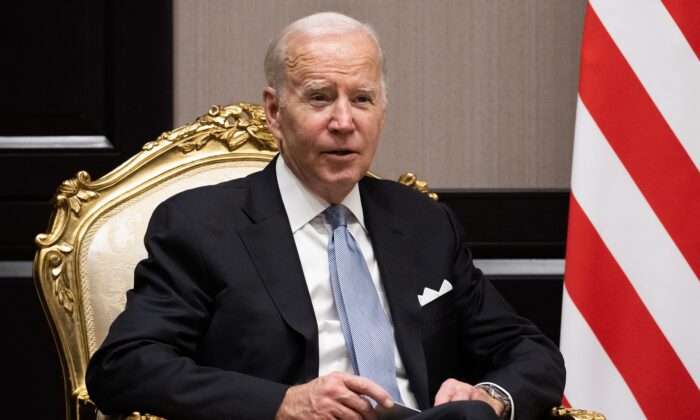 “Courts have issued orders blocking our student debt relief program. As a result, at this time, we are not accepting applications,” the administration’s webpage for the program states.

The Department of Education did not immediately respond to a request for comment.

Several courts have ruled the program is unconstitutional. One ruling was handed down this week by a federal judge in Texas.

In another recent ruling, an appeals court paused the program while it considers a request for a long-term injunction.

The administration has appealed the rulings, which it noted on the webpage.

Biden and Education Secretary Miguel Cardona, a Biden appointee, announced the program in August. They have said the Higher Education Relief Opportunities for Students (HEROES) Act of 2003 gives Cardona the authority to grant the widespread relief because of the COVID-19 national emergency.

Litigation against the effort has said the HEROES Act does not empower the administration to offer relief to tens of millions of borrowers. Plaintiffs have also said the program violated the Administrative Procedure Act, which requires a public comment period before a new program is started.

White House press secretary Karine Jean-Pierre said in a statement Thursday that tens of millions of people have already filed for the program, and many have been approved.

Cardona said he was disappointed in Pittman’s ruling.

“Amidst efforts to block our debt relief program, we are not standing down. The Department of Justice has appealed today’s decision on our behalf, and we will continue to keep borrowers informed about our efforts to deliver targeted relief,” he said.

Elaine Parker, president of the Job Creators Network Foundation, which brought the suit in Texas, said the ruling was correct.

“This ruling protects the rule of law which requires all Americans to have their voices heard by their federal government,” she said. “This attempted illegal student loan bailout would have done nothing to address the root cause of unaffordable tuition: greedy and bloated colleges that raise tuition far more than inflation year after year while sitting on $700 billion in endowments. We hope that the court’s decision today will lay the groundwork for real solutions to the student loan crisis.”