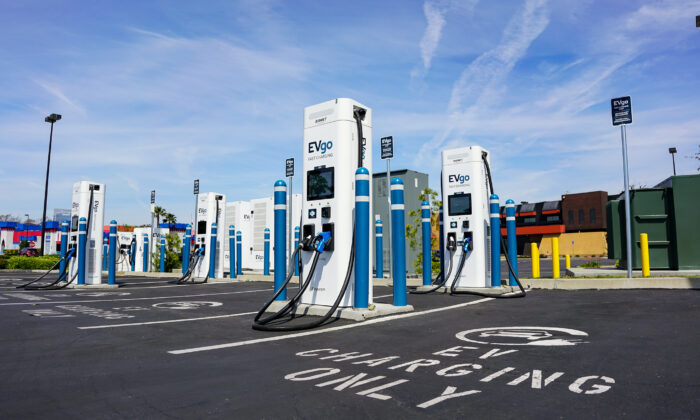 States must submit plans by Aug. 1 to get their portion
By Beth Brelje

The vast majority of the driving public in the United States uses traditional gas-powered vehicles, but the Biden administration is focused on the transportation problems of electric vehicles (EVs), namely the scarcity of charging stations in many areas, rather than tackling record high gas prices.

California has 13,452 EV charging stations, the most of any state, while Alaska has the fewest—just 48—followed by North Dakota with 57, South Dakota with 59, and Wyoming with 62, according to the U.S. Department of Energy.

The U.S. Department of Transportation (DOT) is set to spend big to fund more EV charging stations. Under the Infrastructure Investment and Jobs Act, $5 billion has been allocated for the National Electric Vehicle Infrastructure Formula program, with $1 billion being disbursed annually over the next five years.

The money will be split among states and must be used for projects directly related to charging vehicles at facilities that will be open to the public. The goal is to build a network of EV charging stations along the interstate highway system on the “alternative fuel corridors” that most states have identified in recent years.

Before the states see any money, the state governments must describe how they intend to use the funds by submitting an “EV infrastructure deployment plan” by Aug. 1, 2022, to the Federal Highway Administration (FHA), which administers the funding. The plan must be approved by the administration.

States are working on plans now and seeking public input on the local placement of charging stations.

EV infrastructure deployment plans will be assessed on several factors including the distance between publicly available electric vehicle charging stations; connections to the electric grid, including electric distribution upgrades; vehicle-to-grid integration; and plans for the use of renewable energy sources to power charging and energy storage, according to an FHA fact sheet.

Transportation Secretary Pete Buttigieg may withhold or withdraw funding from a state if it fails to submit its plan in time, or if the state has not taken action to carry out its plan. In that case, the money could be given to other states.

The DOT has encouraged states to consider equity concerns that might arise with the installation of electric vehicle supply equipment.

During project planning, states should “consider how benefits and burdens vary for and are distributed across specific populations, including users of differing race, ethnicity, gender, physical and cognitive ability, age, education, income level and language,” the DOT says on its website.

It notes that planners may run into challenges such as the financial accessibility of EV ownership compared to the benefits of EV charging infrastructure. That is, low-income people are unlikely to be able to afford an EV and would get no benefit from a local charging station. But skipping over certain communities would cause gaps in access, or “EV charging deserts.”

Another challenge is that consumers will have a variety of at-home charging capabilities. Renters, residents in multiunit dwellings, or those without dedicated parking may face barriers to charging or need to charge vehicles exclusively away from home.

A second round of funding, $2.5 billion in competitive grants, will be announced by the DOT later in 2022, according to the White House. These grants will be geared toward EV charging access in rural and underserved communities.