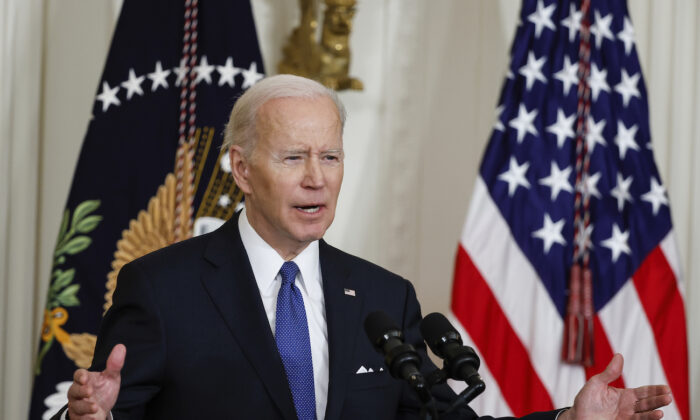 The Biden administration asked an appeals court on April 11 to reinstate the federal COVID-19 vaccine mandate following a critical legal victory last week, while the White House’s COVID-19 coordinator said the administration is willing to prolong the mask mandate based on a Centers for Disease Control and Prevention (CDC) decision.

A divided panel of the U.S. Court of Appeals for the 5th Circuit reversed a January nationwide injunction order by Judge Jeffrey Brown—appointed to the District Court for the Southern District of Texas by former President Donald Trump—ruling that the federal judge didn’t have jurisdiction in the case. The panel noted that those seeking a challenge should have pursued administrative remedies under civil service law.

The 2–1 win paves the way toward the reinstatement of the federal COVID-19 vaccine mandate, while the Justice Department has requested that the New Orleans-based appellate court take “appropriate steps so that the government may resume implementation and enforcement” of the mandate.

The judgment is set to take effect on May 31, but the recent request would move up the timeline for speedy mandate renewal. The department argued that the urgency is “justified by the serious ongoing harm to the public interest and to the government.”

President Joe Biden initiated the executive order on Sept. 9, 2021, mandating that all 3.5 million government employees get vaccinated against COVID-19, with exemptions for religious and medical reasons, or face disciplinary action, including termination.

Soon after the mandate was issued, the administration was hit with lawsuits as numerous organizations and individuals challenged it, including Feds for Medical Freedom, a grassroots coalition that filed the lawsuit.

Marcus Thornton, president of the group, told The Epoch Times in an emailed statement that it “continues to explore every available legal avenue to prevent what we see as the unconstitutional and immoral implementation of the vaccine mandates aimed at federal employees and contractors.”

“Beyond our efforts in court, we also continue to state our case directly to the American people and the voting public. Every week, both science and world events make these mandates seem more unreasonable and unconscionable. While COVID is getting less deadly, instability in Eastern Europe and even at our southern border is spiraling further out of control. At the same time, the government is leading a witch hunt aimed at firing qualified diplomats, Border Patrol agents and other national security specialists who won’t get vaccinated or won’t disclose our status. This is bad public policy and the American people know it,” he added.

According to the White House, more than 93 percent of federal employees have received at least one vaccination, and 98 percent have been vaccinated or are seeking a religious or medical exemption.

“This is a [CDC] decision, and I think it is absolutely on the table,” Jha told the “TODAY” show on April 11, noting that the White House’s decision would be based on the “framework that the CDC scientists create.”

Jha said an announcement regarding the mask mandate would be made in “the next few days.”

The BA.2 Omicron coronavirus subvariant currently accounts for 72.2 percent of all COVID-19 cases in the United States and is more transmissible than the original variant. However, it’s considered to be less severe.

Philadelphia announced that it would be reimposing the mask mandate for indoor premises next week after a rise in the number of cases.