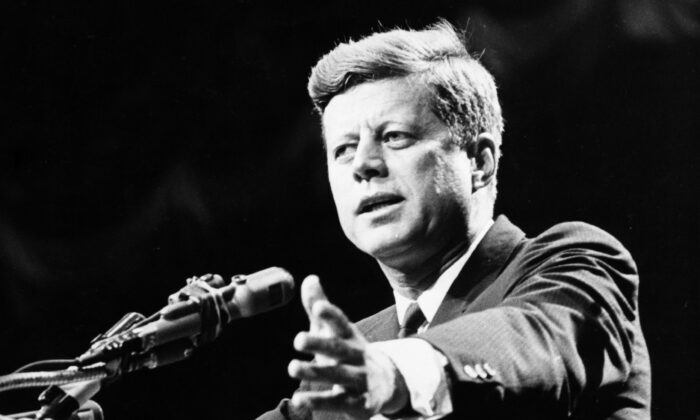 The National Archives on Dec. 15 released almost 1,500 previously classified government documents on the 1963 assassination of President John F. Kennedy, keeping in line with a deadline set by President Joe Biden in October.

The 1,491 documents were released in keeping with a federal statute that calls for the government to release the records in its possession concerning the Kennedy assassination. They include secret CIA cables, internal memos, and other documents linked to the Nov. 22, 1963, assassination of Kennedy in Dallas, for which gunman Lee Harvey Oswald was arrested. Oswald then died when he was shot about two days later, killed by a nightclub owner and alleged mob associate Jack Ruby.

Many of the files shed light on Oswald’s Soviet and Cuban embassy visits, and mention tensions between the United States and Cuba, and a statement from leader Fidel Castro about possible danger to U.S. leaders “if they helped in any attempt to do away with leaders of Cuba.”

The documents also include discussion, in the days after the assassination, of the potential for Cuban involvement in the killing of Kennedy.

One CIA document marked “Secret” states that one individual that Kennedy’s assassin spoke to was the Soviet embassy’s consul, who had links to the KGB’s “assassination department.” The pair discussed the gunman’s efforts to obtain a visa to visit the Soviet Union, according to the documents.

On Oct. 3, 1963, more than one month before the assassination, Oswald drove back into the United States through a crossing point at the Texas border.

Another document details what it says were CIA plots to assassinate Castro, including a 1960 scheme “that involved the use of the criminal underworld with contacts inside Cuba.”

Also made public was a report that Australians in 1962 had received a tip from a man who claimed there was a plot to kill Kennedy. The man claimed he was a driver for Soviet diplomats. An investigation ensued but officials concluded the lead was not credible.

The records were initially intended to be released on Oct. 26. However, the Biden administration on Oct. 22 released a memo stating that the deadline would be pushed back until Dec. 15 at the earliest, but only for material deemed “appropriate for release to the public.”

The memo added that sensitive information pertaining to the assassination will be released in December 2022. At least 10,000 documents remain partially redacted or withheld.

According to the National Archives and Records Administration (NARA), the COVID-19 pandemic has significantly impacted certain agencies’ ability to review the remaining redactions in the documents. More than 90 percent of NARA’s collection on the assassination has been full released to the public since the 1990s, including more than 250,000 records.

The U.S. government released further batches of secret documents to the public throughout 2017 and 2018, although President Donald Trump ultimately decided to push back the release of some records to October 2021 on request of the CIA and FBI over “identifiable national security, law enforcement, and foreign affairs concerns,” he said.

JFK researchers have expressed frustration over the latest release of documents, with some saying that the records do not contain new revelations that could radically reshape the public’s understanding of the events surrounding Kennedy’s assassination.

“It’s always ‘the next time,'” the University of Virginia’s Larry Sabato, a leading scholar of the assassination, told CNN, referring to Biden’s October order stating that the remaining files won’t be released until at least next fall.

Larry Schnapf, a lawyer and assassination researcher, said he plans to file a lawsuit against the Biden administration for not releasing the documents in full.

“We will be seeking a court order instructing the President to release the remaining records or to disclose the specific identifiable harm posed by each document sought to be postponed and how such alleged harm outweighs the strong public interest in the release of these records, which were supposed to have been released by Oct. 26, 2017,” Schnapf told reporters in an email on Tuesday.

The Warren Commission in 1964 concluded that Oswald had been the lone gunman, and another congressional probe in 1979 found no evidence to support the theory that the CIA had been involved. But other interpretations have persisted.

The Associated Press and Ivan Pentchoukov contributed to this report.