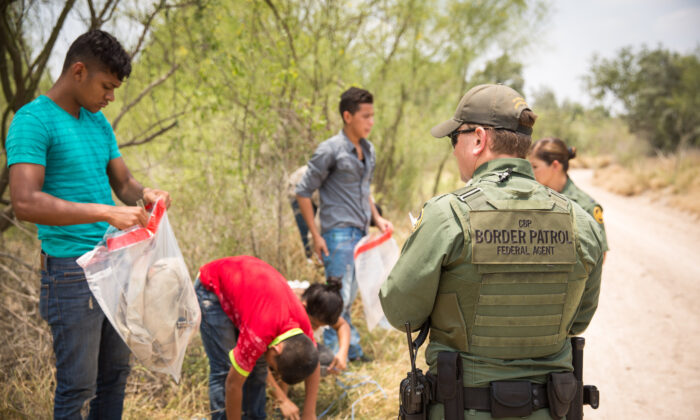 Border Patrol agents have aliens remove their shoelaces and belongings before loading them in a van for transport in Hidalgo County, Texas, on May 26, 2017. (Benjamin Chasteen/The Epoch Times)
Executive Branch

The memorandum from President Joe Biden’s administration halting most deportations for 100 days affects 85 percent of all criminal alien deportations, according to a new analysis.

While a federal judge in Texas on Jan. 26 blocked the order from going into effect, if it does ultimately survive court challenges, it would stop immigration officers from deporting about 85 percent of illegal immigrants, the Center for Immigration Studies (CIS) found. Sex offenders, domestic abusers, and fraud criminals would be among those avoiding removal from the United States.

“Essentially, this memo is an attempt to abolish immigration enforcement,” Jessica Vaughan, who performed the CIS’s analysis, told The Epoch Times.

The memo directs immigration enforcement agencies to focus on people who recently crossed into the United States illegally, who are suspected of terrorism or espionage, or who were convicted of an aggravated felony. Vaughan said the percentage of criminal aliens who actually will be targeted will, in reality, be less than 15 percent because of so-called sanctuary jurisdictions that limit their cooperation with Immigration and Customs Enforcement.

The order, signed by Acting Department of Homeland Secretary David Pekoske, will “result in a very sharp decrease of deportations compared to “those under former Presidents Donald Trump and Barack Obama,” according to Vaughan.

“I was surprised at how far he decided to go because he had been talking as if he wanted to pursue a moderate course, obviously different policies, but claimed to not want to in a radical way,” she added. “But this is really a reckless and extreme order.”

U.S. District Judge Drew Tipton, a Trump appointee, blocked the policy from going into effect for two weeks, after Texas Attorney General Ken Paxton challenged it in court. The judge said Biden’s administration didn’t give “any concrete, reasonable justification for a 100-day pause on deportations.”

White House press secretary Jen Psaki told reporters last week that the order halting deportations for some immigrants “will allow the administration to review and reset enforcement policies and ensure that resources are dedicated to the most pressing challenges, and that we have a fair and effective enforcement system rooted in responsibly managing the border and protecting our national security and public safety.”

In another briefing on Jan. 25, Psaki said the message to migrants at the border “is that this is not the right time to come.”