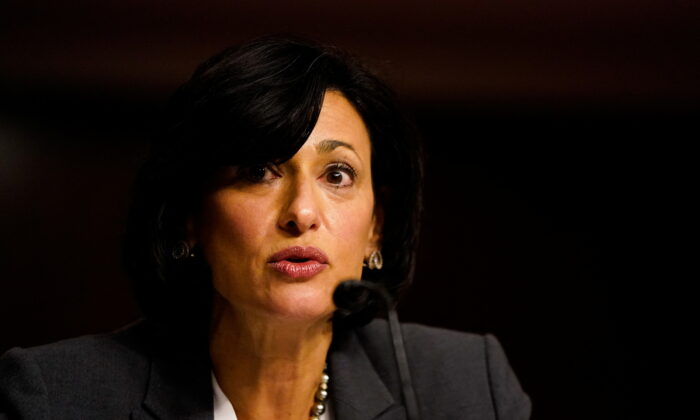 The Biden administration confirmed Wednesday that federal officials won’t change the definition of “fully vaccinated” to include a booster shot.

“Individuals are considered fully vaccinated against COVID-19 if they’ve received their primary series, that definition is not changing,” said Centers for Disease Control and Prevention (CDC) Director Rochelle Walensky.

Walensky said that the CDC is instead using the term “up to date” to push people into getting boosters.

“Someone is considered fully vaccinated if they have received their primary series of vaccines, so if you think about the different requirements that you mentioned, travel, [Occupational Safety and Health Administration], [and Centers for Medicaid & Medicare] rules and other examples, that has not changed and we do not have any plans to change that,” White House COVID-19 response coordinator Jeff Zients said in elaborating.

“We’re using the terminology now ‘keeping your vaccinations up to date,’ rather than what ‘fully vaccinated’ means,” Fauci said during a National Institutes of Health-hosted commentary. “Right now, optimal protection is with a third shot of an mRNA or a second shot of a J&J,” he said, referring to the Johnson & Johnson vaccine as well as the Pfizer and Moderna shots, which use mRNA technology.

Inside the United States, a growing number of businesses and organizations—namely universities—have begun to mandate boosters as a condition for employment or for entering buildings.

Among those businesses, Shake Shack founder Danny Meyer, who is the CEO of the Union Square Hospitality Group, said on Dec. 22 that starting “immediately,” several of his businesses “are going to be requiring that 100 percent of our staff members have a booster within 30 days of their eligibility.”

Already in Israel, individuals have to show proof they’ve received a booster dose, or a third shot, of the Pfizer vaccine in order to enter certain businesses including gyms and restaurants. No cities or municipalities in the United States have issued similar mandates yet, although New York City Mayor Eric Adams, a Democrat, said he is weighing COVID-19 boosters for city employees.

“If we feel we have to get to the place of making that mandatory, we’re willing to do that, but we’re encouraging them to do that now,” Adams told ABC News. “If we close down our city, it is as dangerous as COVID,” Adams added. “That’s what our focus must be. So that proper balance of safety [and] keeping our economy operated is going to allow us to get through.”