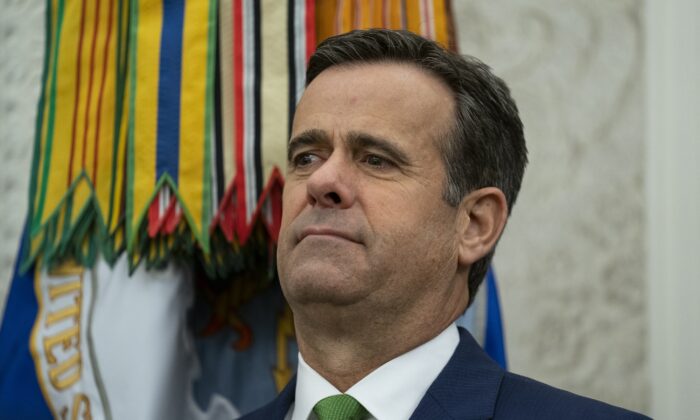 Director of National Intelligence John Ratcliffe watches during a ceremony in the Oval Office of the White House on Dec. 3, 2020. (Evan Vucci/AP Photo)
National Security

Records made public in September show that the Secret Service bought drones from Da Jiang Innovations (DJI) in July. That purchase came just a few days after the FBI purchased drones from the Chinese company.

About a month before the purchases, the Biden administration’s End-User Review Committee revised (pdf) the designation for DJI, excluding some of its technology from the department’s entity list.

The list “identifies entities for which there is reasonable cause to believe, based on specific and articulable facts, that the entities have been involved, are involved, or pose a significant risk of being or becoming involved in activities contrary to the national security or foreign policy interests of the United States.”

The Department of Defense said on July 23 that DJI systems “pose potential threats to national security.” The Department of Homeland Security (DHS) said in a 2017 bulletin (pdf) that it was moderately confident that DJI was “providing U.S. critical infrastructure and law enforcement data to the Chinese government.”

Ratcliffe, who directed national intelligence during the final months of the Trump administration, said the 2017 assessment prompted the administration to advance a policy on not using technology from DJI or other Chinese companies, which are virtually all close to the Chinese Communist Party (CCP).

The purchases made in 2021 “make very little sense,” he said during an appearance on Fox Business’s “Sunday Morning Futures.”

“So it’s hard to make sense out of what’s doing this, other than it is consistent with the Biden administration taking a softer approach, trying to promote a false narrative that somehow China is a competitor and not an adversary. And you would think that the lessons learned from COVID would teach everyone that China’s not to be trusted and that moves like this are harmful to our national security posture.”

Officials with the Secret Service, the White House, and the Commerce Department didn’t respond to requests for comment by press time.

“We cannot comment on specific operational equipment procured by the FBI, but can assure the public that the FBI, as a general matter, takes all necessary measures to ensure the security and safety of its operations,” the FBI said in an email.

The FBI listed a number of capabilities associated with DJI’s Phantom 4 Pro small unmanned aircraft systems (sUAS), or drones, claiming before the purchase that the drone “is the only commercially available consumer sUAS to combine all these capabilities at an acceptable cost.”

The drones “will supplement the Agency’s existing fleet of small unmanned aircraft and improved mission support through the use of the most up-to-date equipment and software,” the Secret Service’s contract reads.

A spokesman for DJI told Axios in September that allegations of the company transmitting information to the CCP weren’t accurate.

“No one has ever found a deliberate attempt to steal data or any of the other fantasies promoted by some of our critics. It simply isn’t true,” he said.

Congress approved legislation in 2019 banning the purchase of drones made in China by the U.S. government, but the bill contains exceptions.

Some members of Congress have been trying to tighten the ban, including Rep. Michael Guest (R-Miss.).

His bill, the Unmanned Aerial Security Act, was approved by a voice vote last week. It would bar the DHS from entering into or renewing a contract for any drones manufactured by Chinese companies.

“The Department of Homeland Security utilizes drones for critical missions, and it is imperative that we trust the technology we are using. It is well known that the Chinese Communist Party has stolen our technology and information in the past. That’s why this legislation is so important,” Guest said in a statement.