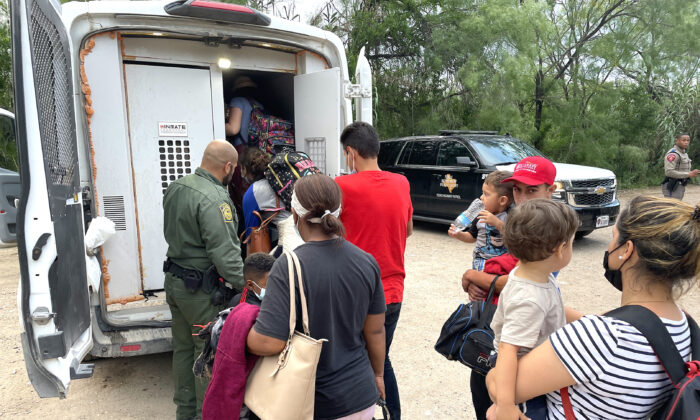 A group of Venezuelans is picked up by Border Patrol after illegally crossing the Rio Grande from Mexico into Del Rio, Texas, on June 3, 2021. (Charlotte Cuthbertson/The Epoch Times)
Executive Branch

President Joe Biden’s administration has not returned a single illegal immigrant to Mexico under the Migrant Policy Protocols after being ordered to restart the program by the Supreme Court last month.

U.S. government officials are in talks with officials in Mexico on rebooting the program but Mexico is so far resisting a formal resumption, court documents filed this week say.

The forms were submitted to U.S. District Judge Matthew Joseph Kacsmaryk, a Trump nominee who initially ordered the Biden administration to restart the program, commonly known as “Remain in Mexico” or MPP.

The Trump-era program centers around making many immigrants who seek asylum wait in Mexico while their claims are heard. More than 55,000 were returned through Oct. 28, 2019, under the program. Mexico’s government agreed during the previous administration to provide the migrants with protection and care, though later reports indicated that some were living in poor conditions.

The Supreme Court upheld Kacsmaryk’s ruling on Aug. 24, finding that the administration’s ending of the program was “arbitrary and capricious,” which violates federal law.

The ruling ordered the Biden administration to “enforce and implement MPP in good faith until such a time as it has been lawfully rescinded in compliance with the” Administrative Procedure Act and until the U.S. government has enough detention capacity to detain all illegal immigrants that must be deported under 8 U.S. Code § 1255 “without releasing any aliens because of a lack of detention resources.”

The Department of Homeland Security said the same day that it had started to engage with the government of Mexico on restarting the program but in the new filings, indicated that little progress has been made.

“In order to restart MPP, the two governments must reach agreement on a number of foundational matters, including: the make-up of individuals who are amenable to MPP, in what circumstances and locations returns to Mexico and reentry into the United States to attend court hearings can occur, how many individuals can be enrolled in given locations, and the types of support these individuals will receive in Mexico. All of these topics, and others, remain under active negotiation,” Ward, the U.S. government lawyer, said.

“Importantly, MPP cannot function without Mexico’s agreement to accept individuals returned from the United States under the program,” he added.

At the same time, the U.S. government is working on organizing other parts of the program, such as exploring funding and obtaining contracts to rebuild facilities used for hearings for illegal immigrants who are part of the program.

The facilities used before were repurposed and would have to be rebuilt with COVID-19 measures taken into account, the U.S. government says. The initial cost is pegged at $14.1 million for construction with another $10.5 million per month required to operate the facilities.

The contacts won’t be executed until an agreement is reached with Mexico.

Mexico’s government has said little about MPP beyond stating it was not bound by the U.S. court decisions but would discuss the matter with U.S. officials.

The U.S. government update was made to adhere to Kacsmaryk’s order, which said that as the U.S. government worked to restart MPP, it would need to file a report with him each month, beginning Sept. 15, on progress made and the situation regarding illegal immigration in the country.

U.S. border agents made over 200,000 arrests at the southern border in August, one of the highest months on record, as the Biden administration grapples with a massive influx that shows no signs of abating.

States along the border have tried fighting back in court. The order to resume MPP came from a lawsuit filed by the states of Missouri and Texas.