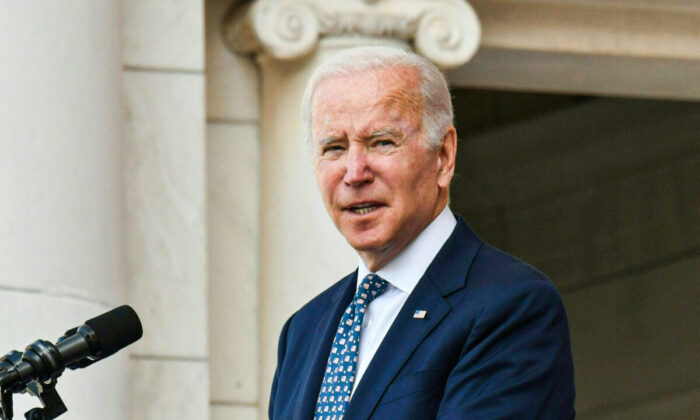 The Biden administration on Nov. 23 asked the U.S. 6th Court of Appeals to reject an order from another federal appeals court and reinstate its Occupational Safety and Health Administration vaccine mandate for private businesses with 100 or more workers.

Several lawsuits that challenge the OSHA rule, known as an emergency temporary standard, were combined into one and sent to the Cincinnati, Ohio-based 6th Circuit Court, of which 11 of 16 judges are Republican appointees.

Two days after OSHA published the rule, scheduled to go into effect on Jan. 4, the Louisiana-based U.S. 5th Court of Appeals issued an order blocking the mandate. Last week, in a scathing ruling, the panel of judges on the appeals court reaffirmed their previous injunction and wrote that the mandate will likely be declared unconstitutional.

On Nov. 23, the Biden administration filed court papers arguing that the 5th Circuit panel erroneously interpreted the OSHA mandate, saying that “the speculative compliance costs and similar harms asserted by regulated parties cannot overcome the extraordinary harms to the public interest detailed above.”

“Simply put, delaying the standard would likely cost many lives per day, in addition to large numbers of hospitalizations, other serious health effects, and tremendous expenses,” White House lawyers alleged in the new filing. “That is a confluence of harms of the highest order.”

Further, the administration argued that the 5th Circuit’s assertion that the mandate would deal significant economic damage to the United States was incorrect. COVID-19-related outbreaks, Biden administration lawyers contend, have forced shutdowns of businesses and various institutions, although numerous studies have shown that fully vaccinated individuals play a relevant role in spreading COVID-19—not only the unvaccinated.

The OSHA rule mandates that businesses with 100 or more workers have to either have their employees receive the COVID-19 vaccine or submit to weekly testing. Unvaccinated workers also have to wear masks inside the workplace, the rule says, which also stipulates that violators can face penalties of thousands or even tens of thousands of dollars per incident.

When it was published earlier in November, it triggered a torrent of lawsuits from Republican-led states, individuals, and businesses.

The 5th Circuit ruling this month described the mandate as “fatally flawed” and told OSHA to not enforce the requirement “pending adequate judicial review.”

After the ruling, OSHA last week said it would suspend enforcement of the rule, although the agency said it was confident the Biden administration would prevail in the courts. White House officials, including press secretary Jen Psaki, also said that businesses should move forward and implement it despite the legal challenges.

“Our message to businesses right now is to move forward with measures that will make their workplaces safer and protect their workforces from COVID-19,” Psaki told reporters at the White House last week. “That was our message after the first stay issued by the 5th Circuit. That remains our message, and nothing has changed.”

Data provided by the Centers for Disease Control and Prevention show that about 47 million COVID-19 cases have been reported in the United States since the onset of the pandemic last year, and that about 770,000 have died.