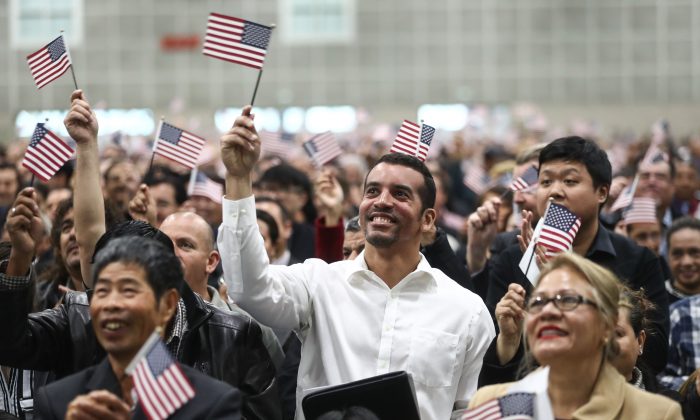 The U.S. Citizenship and Immigration Services (USCIS) announced Friday that the Biden administration is launching an inter-agency effort to make millions of immigrants living in the United States citizens.

President Joe Biden asked federal agencies to work on “welcoming strategies that promote integration, inclusion, and citizenship,” through an executive order. The U.S. Citizenship and Immigration Services announced Friday the agency’s plan to “breaking down barriers to U.S. citizenship” and promote naturalization for immigrants who are eligible.

The federal campaign will actively recruit eligible immigrants and eliminate many naturalization rules that the Trump administration put in place so more people can apply.

“New citizens, strengthened with the power and responsibilities that American citizenship brings, make our Nation better. This strategy will ensure that aspiring citizens are able to pursue naturalization through a clear and coordinated process,” said Homeland Secretary Alejandro N. Mayorkas in a release with a goal of “promoting naturalization to all who are eligible.”

The administration also supports 2 pieces of Democrat legislation, the American Dream and Promise Act and the Farm Workforce Modernization Act which would create a pathway to citizenship for some 11 million people if the bills can pass the Senate.

The campaign will not only target lawful permanent residents, many of whom have already been in the United States for years but “will also reach out to people earlier in their immigration journeys to reach those who may one day become eligible for naturalization.”

“USCIS remains committed to empowering immigrants to pursue citizenship along with the rights and opportunities that come with it. … There is no greater testament to the strength of America than our willingness to encourage others to join us as U.S. citizens as we work together to build a more perfect union,” said USCIS Acting Director Tracy Renaud.

“We look forward to the work ahead in welcoming and supporting aspiring Americans and equipping them with the tools they need to be successful in their journey to citizenship, and beyond,” Renaud added.

The USCIS campaign will include a variety of immigrant, community, and education outreach initiatives to achieve their goal of reaching the millions of immigrants, including increasing citizenship public education awareness campaigns, social media outreach efforts, targeted outreach with grassroots immigration organizations working with recent arrivals, community outreach with groups like the farmworkers or social security administration. The campaign will expand outreach to places like libraries, museums, and employers. The agency will expand materials into multiple languages and increase citizenship training.