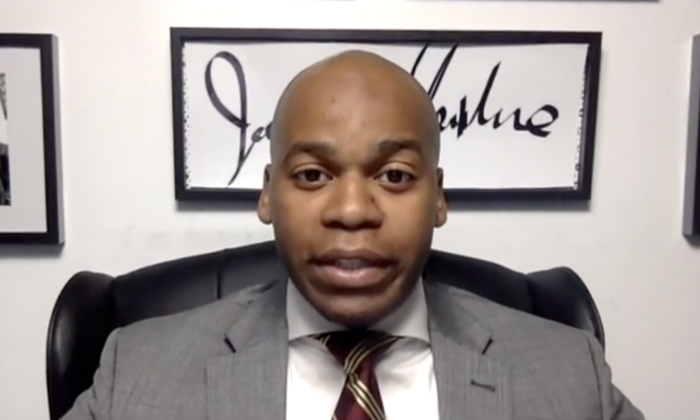 Biden Admin Worked ‘Under the Radar’ to Give WHO More Power: Liberty Counsel Senior Attorney

Masooma Haq
Masooma Haq began reporting for The Epoch Times from Pakistan in 2008. She currently covers a variety of topics including U.S. government, culture, and entertainment.
View profile
Follow
and Kevin Hogan

Changes to the United Nations’ 2005 international health regulations (IHR) have been occurring “under the radar” because Americans would object to the unconstitutionality of the changes, according to Jonathan Alexandre, a senior counsel for international litigation nonprofit Liberty Counsel.

“They’ve done this undercover because they knew at any point, if you were to tell Americans you’re ceding the authority to an international body that is unaccountable to the people, if the media, were to echo that message, certainly Americans would have no regard for this,” Alexandre said during a recent interview with “NTD News Today.” “And we ought not to have any regard for this international body [the WHO] that is not accountable to us.”

The Biden administration proposed 13 amendments to the IHR, that, if approved, would alter international public health rules—including expanding the powers given to the WHO director-general to declare a public health emergency, bypassing U.S. governmental bodies.

Loyce Pace, U.S. Department of Health and Human Services assistant secretary for global affairs, defended the amendments in January during remarks given virtually to the 150th Session of the Executive Board at the WHO in Geneva about pandemic preparedness.

“The United States led an inclusive and transparent process to develop this decision, as we are mindful that updating and modernizing the IHR are critical to ensuring the world is better prepared for and can respond to the next pandemic,” Pace said.

HHS officials didn’t respond by press time to a request by The Epoch Times for further comment.

Alexandre said the 13 amendments submitted by the administration are shameful and dangerous.

“The shameful part is that it’s coming from our president, the fact that Joe Biden has proposed these 13 amendments.

“The danger in it is that it’s ceding control over to this government entity that is not the United States, and the unconstitutional part is that they don’t abide by any of our Bill of Rights, any of the freedoms that we’ve committed ourselves to,” he said. The WHO is “an unelected body that is determined for whatever cause is necessary to basically put the world on a chokehold, have it follow its dictates, depending on what threat or pandemic it deems at the moment to be necessary in order to lock down the entire world.”

WHO Pandemic Treaty Will Effectively Take Away Countries’ Sovereignty: Former WHO Scientist

The Biden administration in past statements has denied that the IHR amendments would weaken U.S. sovereignty.

While Biden administration officials say they support a separate document, which some are calling a pandemic treaty, they are also advocating for amendments to the IHR as a faster way of overcoming the “weaknesses in global health security.”

“Immediate steps” could be taken by changing the IHR to improve certain areas, “particularly around early warning systems, coordinating the response, and information sharing,” Secretary of State Antony Blinken and Secretary of Health and Human Services Xavier Becerra wrote in an opinion piece published in the Journal of the American Medical Association on Aug. 31, 2021.

Alexandre said these amendments give the WHO, and specifically its director-general, the power to bypass “any governmental authority within the United States, … any accountability that these people have to elected individuals, [and] any authority that is seated from the Constitution.”