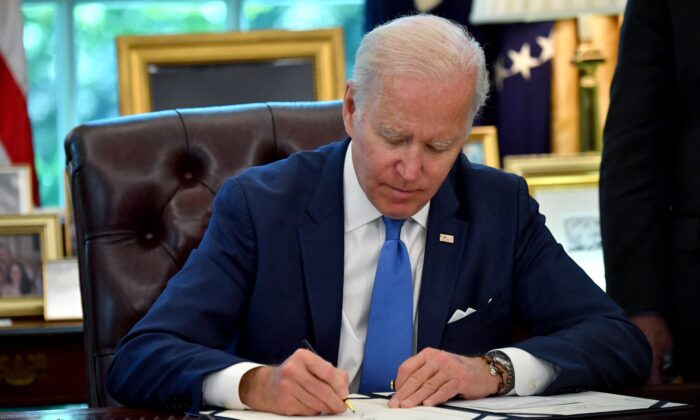 President Joe Biden signs into law the Ukraine Democracy Defense Lend-Lease Act of 2022, in the Oval Office of the White House in Washington on May 9, 2022. (Nicholas Kamm/AFP via Getty Images)
By Katabella Roberts

The Biden administration will provide approximately $1.1 billion in additional security assistance for Ukraine as part of its commitment to support the country’s long-term defense needs amid its war with Russia, the Department of Defense (DoD) announced on Sept. 28.

The latest package is being provided under the Ukraine Security Assistance Initiative (USAI), which does not pull weapons directly from U.S. stockpiles but instead funds contracts to purchase weapons and equipment through the private sector.

DOD said the assistance will fund 18 of the High-Mobility Artillery Rocket Systems or HIMARS, which have a range of about 40 miles and can strike faraway targets with greater accuracy. Officials say HIMARS have played a key role in Ukraine’s successes against Russia in recent weeks. The funding also covers ammunition for them.

It will also provide the funding needed for body armor and other field equipment, training, maintenance, and sustainment.

In a statement announcing the latest round of funding, the pentagon said: “Together with our Allies and partners, our unified efforts will help Ukraine continue to be successful today while building the enduring strength of Ukraine’s forces to ensure the continued freedom and independence of the Ukrainian people.”

The announcement regarding the latest round of funding comes after referendums were held in four occupied regions of Ukraine: Donetsk, Luhansk, Zaporizhzhia, and Kherson, to decide if residents in those regions want to become part of Russia.

Russia says the results of those referendums showed resounding support for joining Russia, with Luhansk voting 98.2 percent to join with Russia, Donetsk 99.23 percent in favor, the Kherson region voting 87.05 percent in favor, and the Zaporizhzhia region voting 93.1 percent to become part of Russia, according to results announced early Wednesday and reported by The Moscow Times.

However, U.S., Ukrainian, and NATO officials have described them as “sham” referendums and have responded by increasing their support for Ukraine with a new wave of sanctions aimed at Russian officials allegedly involved in staging the polls and increased funding for Ukraine.

“Sham referenda in the Donetsk, Luhansk, Zaporizhzhia, and Kherson regions of Ukraine have no legitimacy and will be a blatant violation of the UN Charter,” NATO officials said in a statement on Sept. 23.

“NATO Allies will not recognize their illegal and illegitimate annexation. These lands are Ukraine.  We call on all states to reject Russia’s blatant attempts at territorial conquest. “