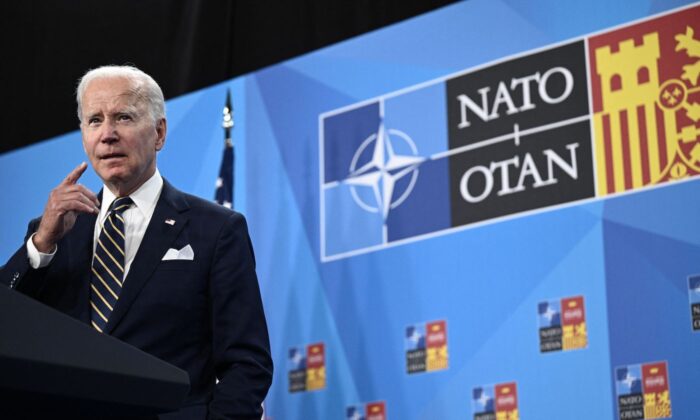 U.S. President Joe Biden gestures as he addresses media representatives during a press conference at the NATO summit in Madrid, on June 30, 2022. (Brendan Smialowski/AFP via Getty Images)
Executive Branch

The Biden administration announced new security assistance to Ukraine on July 1 in a package worth about $820 million in total.

The assistance comprises an authorization of a Presidential Drawdown (PDA) of security assistance valued at up to $50 million, as well as $770 million in Ukraine Security Assistance Initiative (USAI) funds. The PDA is the 14th drawdown of arms and equipment from the Pentagon’s inventories since August 2021.

The latest $820 million aid package was broadly announced by President Joe Biden at a news conference on Thursday in Madrid, which was the third and final day of the NATO summit focused on the Russia-Ukraine war.

“We are going to support Ukraine as long as it takes,” Biden said, adding that the United States is giving Ukrainians “the capacity” so that “they can continue to resist the Russian aggression.”

The Pentagon issued a more comprehensive announcement on Friday as it formalized the announcement. It said that the USAI funds in the latest aid package will provide for Ukraine two National Advanced Surface-to-Air Missile Systems (NASAMS), a Norwegian-developed anti-aircraft system that is used to protect the airspace around the White House and Capitol in Washington.

Ukrainian President Volodymyr Zelenskyy expressed his gratitude in his nightly video address, saying on Friday: “I am especially grateful today to the United States and to Biden personally for the package of support for Ukraine announced today, which includes very powerful NASAMS—an anti-aircraft missile system that will significantly strengthen our air defense. We have worked hard for these supplies.”

The USAI funds will also provide for up to 150,000 rounds of 155mm artillery ammunition, as well as four additional counter-artillery radars.

The counter artillery radars being sent are the Raytheon-Technologies AN/TPQ-37 systems, a senior defense official told media, reported Reuters. This is the first time these systems are being sent to Ukraine which have about triple the effective range of the previously sent AN/TPQ-36 systems.

The radars will require weeks at a minimum for defense companies to build. Ukrainians are also being trained to use the newly provided systems.

The package will also include additional ammunition for High Mobility Artillery Rocket Systems (HIMARS), provided by the PDA authorization. The Pentagon had provided the medium-range rocket systems to Ukraine in June.

Much of the aid will take weeks or months to reach Ukraine.

Secretary of State Antony Blinken said in a statement following the announcement of the aid: “As the United States prepares to commemorate our independence, we remain committed to the independence, security, sovereignty, and territorial integrity of Ukraine.”