Biden to Cancel $10,000 of Student Loan Debt for Millions, Amid Inflation Concerns 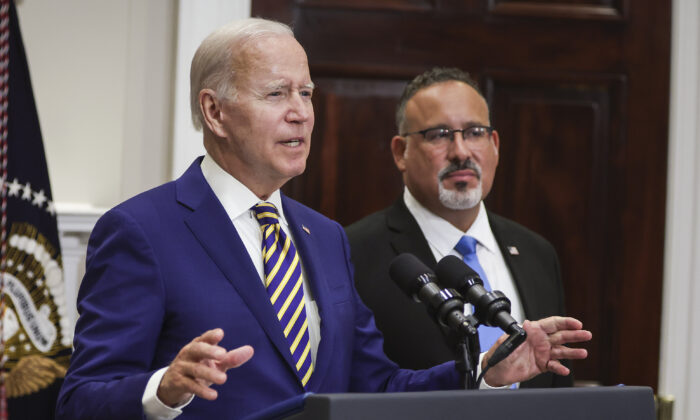 President Joe Biden said on Aug. 24 that his administration will spend hundreds of billions of dollars to pay off $10,000 in federal student loan debt for some borrowers, amid widespread concern that the move will worsen the inflation crisis.

Individuals earning less than $125,000 a year or families earning less than $250,000 will be eligible for up to $10,000 in debt cancellation, the Education Department said. Pell Grant recipients who meet those income standards will be eligible for relief of up to $20,000; those grants are typically awarded to students from low-income households to help them cover their college expenses.

Nearly 8 million borrowers may be eligible to receive relief automatically because the department already has their relevant income information, Biden said while speaking at the White House.

In addition, a freeze on student loan repayments and interest that has been in place since March 2020 will be extended for a final time to the end of this year.

“In keeping with my campaign promise, my Administration is announcing a plan to give working and middle-class families breathing room as they prepare to resume federal student loan payments in January 2023,” Biden wrote on Twitter.

“We’re delivering targeted relief that will help ensure borrowers are not placed in a worse position financially because of the pandemic, and restore trust in a system that should be creating opportunity, not a debt trap,” he said.

The Aug. 24 announcement follows months of pressure from a vocal, progressive wing of Democrats who have called on Biden to fulfill his campaign promise. While Democrats insist that the cancellation will support Americans who struggle financially, Republicans question whether it actually helps those most in need.

Citing a new analysis by the Penn Wharton Budget Model, a nonpartisan group at the University of Pennsylvania’s Wharton School of Business, House Republicans contend that forgiving federal student loan debt won’t only cost $300 billion over the next decade, but also largely will benefit higher-income earners.

“Americans are already struggling under record-high inflation,” the GOP members on the House Ways and Means Committee said. “Forgiving $10,000 of student loan debt per person does nothing to bring down inflation, and will only exacerbate the rising cost of higher education rather than address it.”

In a Momentive survey conducted on behalf of CNBC, 59 percent of respondents said they are “concerned” that canceling student loan debt will “make inflation worse,” with 34 percent saying they were “very concerned” about the negative effect on the economy.

The survey, conducted online from Aug. 4 to Aug. 15 among 5,142 adults, also found that 30 percent of respondents don’t think anyone should get any student loan forgiveness, while 32 percent welcome a blanket discharge for all, and 34 percent say loans should be forgiven for those in need.

The move also is likely to draw a legal challenge over whether the executive branch of the federal government can bypass Congress to offer such sweeping relief.

In a memo released the day before the announcement, Cardona said it’s justified under what’s known as the HEROES Act, a post-9/11 higher education law that allows his department to provide relief in response to a national emergency.

Specifically, the 2003 law states that the education secretary may “waive or modify any statutory or regulatory provisions” relating to federal student financial aid for those serving in the military during a war, or those living or working in an area affected by a disaster, or those “suffered direct economic hardship as a direct result of a war or other military operation or national emergency.”

According to the memo, the HEROES Act applies the ongoing COVID-19 national emergency, first declared by President Donald Trump in March 2020 and extended by Biden through January 2023.