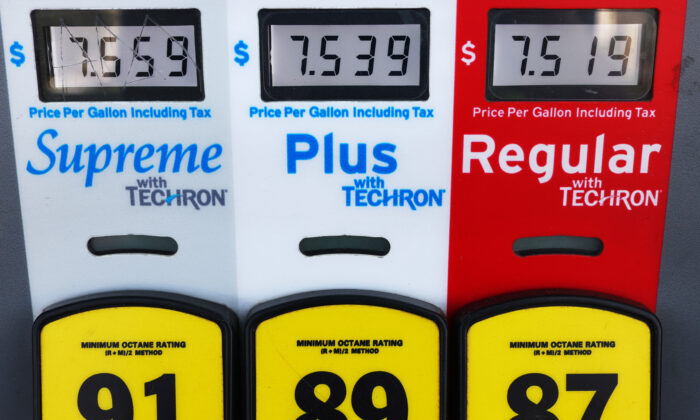 While many components affect the price of gasoline, two leading factors contributing to the energy crisis the United States is facing are the many years of Democrat-backed anti-fracking policies and President Joe Biden’s pledge to wean America off fossil fuels, says Jerry Simmons, president and CEO of Domestic Energy Producers Alliance.

“Joe Biden, the candidate, over and over again, he said, ‘We’re going to do away with fossil fuels, we’re going to end oil and gas,’” Simmons told NTD’s “Capitol Report,” discussing the effects of such policies on the cost of fuel at the pump.

Before the global energy situation grew more dire following Russia’s invasion of Ukraine and the resulting blacklisting of Russian oil, most countries around the world were already experiencing pandemic-related shortages of oil.

OPEC+ was restricting oil supply, and despite U.S. calls to increase output, the global body decided to keep supply unchanged given uncertainty over demand due to the ongoing emergence of new COVID-19 variants.

Why Is Biden Threatening an American Pipeline While Begging Russia, OPEC for Oil and Gas?

Prefacing this was a really tough 2020 for the U.S. oil and gas industry, when the Biden administration on his first day in office tore up years of planning, approvals, and billions of dollars in investments for the Keystone XL pipeline, Simmons said. The pipeline had been touted by the previous U.S. administration as the ticket to American energy independence and clout as a global energy supplier, to compete in world markets against authoritarian regimes being enriched by their oil resources, such as Russia and Iran.

“It has huge impacts,” Simmons said of Biden and his policies. “I believe that we’re seeing that now.”

But now, blaming Russia’s war in Ukraine, the Biden administration has in the past few months reluctantly done an about-face on its previous policies, asking U.S. energy producers to produce more oil and gas.

The representative of U.S. energy producers said it wasn’t lost on them that this request came only after the Biden administration had already approached the Saudis and the Venezuelans, “maybe even the Iranians,” asking them to produce more oil.

“The idea that you ask some of those foreign countries to produce before you ask American producers to produce. I don’t know … if you look at the Green New Deal, and some of the kind of really far-left green organizations that might have an influence over the Biden administration, they want us to keep it in the ground,” Simmons said.

“But again, if you’re concerned about climate change and global CO2 emissions, just because it’s produced in another country doesn’t mean that it’s not going to have the same impact. So it doesn’t make any sense.”

He emphasized that U.S. oil and gas producers operate under some of the strictest environmental regulations on the planet and have to meet much higher standards that promote the protection of the environment.

Some of the solutions being put forward now to ease the burden of crippling gas prices are absolutely not going to be much help to American families, Simmons told NTD.

“California is a great example,” he said. “Just a few years ago, Californians were importing less than 10 percent of the oil that they consumed—mostly in transportation. And today I think that number is like 68 percent, and most of that oil is coming from Saudi Arabia by a tanker … so they’re floating boats from the Middle East to the West Coast of this country to refine a product so that Governor Newsom can not have the production in California, which makes no sense at all.

“So the drivers in California, when they pull up and they pay $6 a gallon, they can thank those policies for that. And to offer somebody a debit card for $400? That’s a pretty short-term solution,” he said of the financial support currently being offered to Californians to address inflation at the pump.

“If you’re a plumber or a carpenter, and you’ve got a Ford F-150 to get to work, that’s going to cost you $200 to fill. So you know, [$400] is a drop in the bucket. It’s a short-term solution to a very serious problem that needs to have policy changes, I believe. That’s my opinion.”

Simmons also said that despite the Biden administration’s unfriendly treatment of the industry, American oil companies are trying their best to react to U.S. energy needs in the here and now.

He said domestic companies are already producing more oil than before the request.

“The rig count, year over this week, we’re up 60 percent in onshore drilling rigs in this country. So we’re reacting as an industry, we’re trying to do our best. But up until the last couple of months, this administration has done everything they can to stop us from producing.”

To make matters more challenging for domestic energy producers, public opinion on U.S. energy production appears to be weighted in favor of limiting the extraction of fossil fuels.

In March, a survey by the Federal Reserve Bank of Dallas pointed to pressure from investors as being the top obstacle to growth, according to a majority of U.S. oil and gas executives.

Meanwhile, across the border to the north—while facing the same pressures driven by a growing number of consumers being swayed by environmental, social, and corporate governance (ESG) scores and marketing when making investment decisions—top banks in Canada have continued to fund the nation’s oil sands projects, even increasing investment in 2021 to $16.8 billion, according to data seen by activist group Rainforest Action Network.

Read More
ESG Investments in Russia and China Are Questioned After Ukraine War
‘Environmental, Social, and Corporate Governance’ Scores Are Changing the Oil Industry
Net-Zero and ESG Are Worsening the Energy Crisis—and Weakening the West

But not all Democrats have supported the Biden administration’s energy policies to date and its approach to dealing with rising inflation.

Sen. Joe Manchin (D-W.Va.) has urged the Biden administration to partner with the oil-rich neighboring democracy of Canada to remove barriers to a “North American energy alliance” to meet the free world’s energy and mineral demands.

“I am also extremely concerned with China as the gatekeeper of the critical materials we need for everyday life, in addition to the minerals crucial to energy and defense applications. It makes no sense to remain beholden to bad actors when we have abundant resources and manufacturing know-how here in the United States,” he said in a statement on March 31.

“We should be looking at North America as the energy juggernaut of the world, [particularly together with Canada and Mexico.] How do you evaluate the supply risk from these allies as opposed to somewhere like Russia or China?”