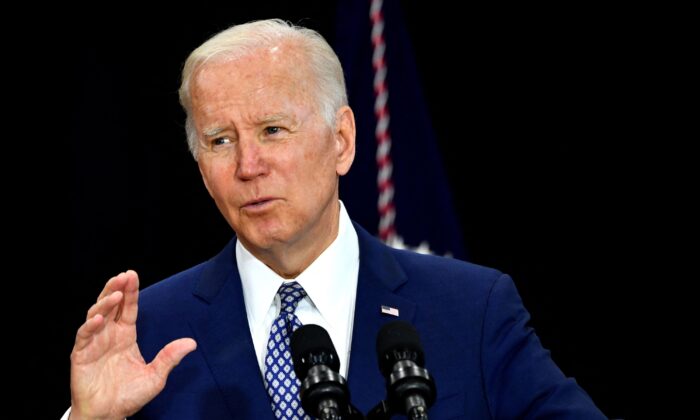 The Biden administration has placed an order for millions of doses of a vaccine intended to protect against smallpox and monkeypox, after the first case of monkeypox in the United States this year was confirmed in Massachusetts on May 18.

Monkeypox, a viral disease typically limited to Africa, has been reported in several countries with more than 25 confirmed cases since the beginning of May.

Denmark-based biotech group Bavarian Nordic announced the order on May 18, which prompts the company to convert its bulk liquid smallpox vaccine into freeze-dried versions, which have an improved shelf life. The bulk vaccine has already been manufactured and invoiced under previous contracts with the U.S. government, the Bavarian Nordic stated. The vaccine is approved under the name “JYNNEOS” in the United States.

The order represents $119 million worth of the Jynneos vaccines, which would be manufactured and invoiced in 2023 and 2024.

Under the contract, the Biden administration has the option to place another order worth $180 million. That would allow for about 13 million freeze-dried doses of the Jynneos smallpox vaccine to be manufactured by around 2024 and 2025. The majority of the bulk vaccine for those doses has already been manufactured and invoiced, according to the company.

Bavarian Nordic later announced on May 19 it will supply “an undisclosed European country” with its smallpox vaccine. It is approved under the name “IMVANEX” in Europe for smallpox, but has been previously given off-label for monkeypox, the company said.

The U.S. Food and Drug Administration (FDA) approved the company’s Jynneos vaccine in September 2019 for the prevention of smallpox and monkeypox disease in people aged 18 and over. The vaccine would be “available for those determined to be at high risk of either smallpox or monkeypox infection.”

The FDA stated at the time, “This is the only currently FDA-approved vaccine for the prevention of monkeypox disease.”

Peter Marks, director of the FDA’s Center for Biologics Evaluation and Research, said at the time that “the intentional release” of smallpox, a highly contagious virus, “could have a devastating effect.”

Bavarian Nordic President and CEO Paul Chaplin called the current monkeypox situation in Europe one that “calls for a rapid and coordinated approach by the health authorities,” adding that the company is “pleased to assist in this emergency situation.”

The National Institute of Allergy and Infectious Diseases (NIAID) back in 2004 had given Barvarian Nordic a $100 million contract for research on a smallpox vaccine, as part of Project BioShield, a government initiative to incentivize private companies to develop vaccines and other countermeasures to deal with chemical, biological, radiological, and nuclear threats.

According to the Centers for Disease Control and Prevention, monkeypox in humans shows symptoms similar to smallpox, but milder. Those infected may have fever, headache, muscle aches, and exhaustion, as well as skin lesions that can last up to a month.

After fever onset, patients can also develop a rash that often starts on the face and spreads to other parts of the body. Monkeypox causes lymph nodes to swell while smallpox does not, the CDC states on its website.

Authorities in multiple countries have reported that the vast majority of cases involve men who have sex with other men, but have not yet confirmed how people have been infected. The World Health Organization says monkeypox “can be transmitted by droplet exposure via exhaled large droplets and by contact with infected skin lesions or contaminated materials.”

Italy, Sweden, and Australia each reported their first confirmed cases of monkeypox this year, on May 20.

Canada also reported its first two cases in Quebec on May 19, and is investigating 17 suspected cases in the greater Montreal region.

The United States confirmed one case in Massachusetts on May 18. A suspected case of monkeypox is also being investigated in New York City after a man presented to a hospital with symptoms on May 19.

Also on May 19, Spain reported seven cases, while Portugal updated its number of confirmed cases to 14. Both Spain and Portugal have over 40 suspected cases of monkeypox. That same day, France reported its first suspected case in the Paris/Ile-de-France region.

There are nine confirmed monkeypox cases in the U.K., where the first cases outside Africa were reported. The first U.K. case was reported on May 7, involving a patient who recently traveled to Nigeria.