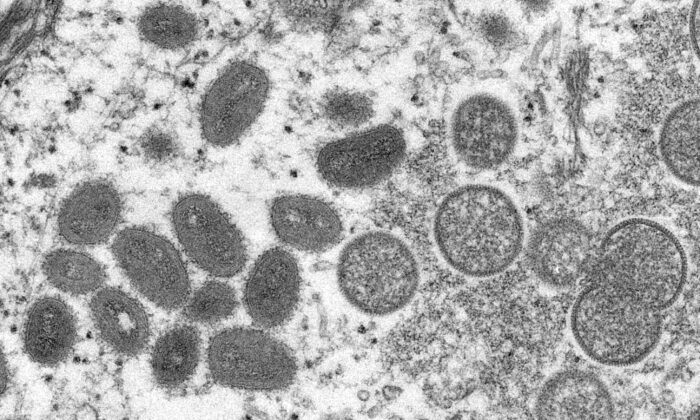 An electron microscopic (EM) image shows mature, oval-shaped monkeypox virus particles as well as crescents and spherical particles of immature virions, obtained from a clinical human skin sample associated with the 2003 prairie dog outbreak in this undated image obtained by Reuters on May 18, 2022. (Cynthia S. Goldsmith, Russell Regnery/CDC/Handout via Reuters)
US News

The Biden administration has ordered an additional 500,000 more doses of the Jynneos vaccine for monkeypox, marking a big step up in the government’s response amid rising cases in the United States and around the world.

Denmark-based biotech group Bavarian Nordic, the manufacturer of the vaccines, said that the U.S. Biomedical Advanced Research and Development Authority (BARDA) has placed the order, to be delivered later this year.

“With the previous order from BARDA for 1.4 million doses of liquid-frozen JYNNEOS, awarded in 2020, this order will bring the total U.S. inventory of the vaccine to nearly 2 million doses,” the company announced on Friday. Many of the 1.9 million doses are being held by the company until the U.S. government requests them.

The 500,000 vaccine doses will be manufactured using bulk materials that are owned by the United States under previous contracts with BARDA, and are currently stored with the company.

“The majority of this bulk, however, will be converted to approximately 13 million freeze-dried doses of JYNNEOS during 2023-2025,” Barvarian Nordic said.

“We have the vaccines and treatments we need to respond,” she said.

As of late Friday, the United States has identified 49 monkeypox cases in 16 states and the District of Columbia. More than 1,470 cases have been found in about 30 other countries outside of Africa, where the virus is endemic, according to the Center for Disease Control and Prevention (CDC).

The CDC said Friday that every case they had looked at in the United States involved very close contact. Officials have alerted doctors to watch for monkeypox cases and offered vaccinations to people in close contact with those who were infected.

Monkeypox, a viral disease typically limited to Africa, was first reported this year in the United States on May 18, in Massachusetts. The Biden administration on the same day placed a $119 million order for the Jynneos vaccine.

Jynneos is the only vaccine the FDA has explicitly approved to prevent monkeypox in the United States, in high-risk adults aged 18 and older. It is also approved for use against smallpox.

At the time of the Jynneos vaccine’s approval in September 2019, Peter Marks, director of the FDA’s Center for Biologics Evaluation and Research, said that a potential “intentional release” of smallpox “could have a devastating effect.”

According to the CDC, the Jynneos vaccine “is administered as a live virus that is non-replicating,” in two injections four weeks apart. People are not considered vaccinated until two weeks after they receive the second dose of the vaccine.

Meanwhile, an older vaccine called ACAM2000, made by Emergent BioSolutions, was approved by the FDA in 2007 to prevent smallpox, but it can also be used to prevent monkeypox, according to CDC recommendations.

The CDC said that ACAM2000 “is recommended for laboratorians working with certain orthopoxviruses and military personnel.” It has noted, however, that the ACAM2000 vaccine “has the potential for more side effects and adverse events” than the Jynneos vaccine.

The CDC’s Advisory Committee on Immunization Practices (ACIP) recommends that people whose jobs may expose them to orthopoxviruses “such as monkeypox” get vaccinated with either ACAM2000 or the Jynneos vaccine.

According to the CDC, ACAM2000 is “a live Vaccinia virus preparation.”

“Following a successful inoculation, a lesion will develop at the site of the vaccination (i.e., a ‘take’). The virus growing at the site of this inoculation lesion can be spread to other parts of the body or even to other people,” the CDC stated. “Individuals who receive vaccination with ACAM2000 must take precautions to prevent the spread of the vaccine virus and are considered vaccinated within 28 days.”

There are over 100 million doses of the ACAM2000 vaccines available, officials recently said.

Monkeypox is in the same virus family as smallpox but presents with milder symptoms.