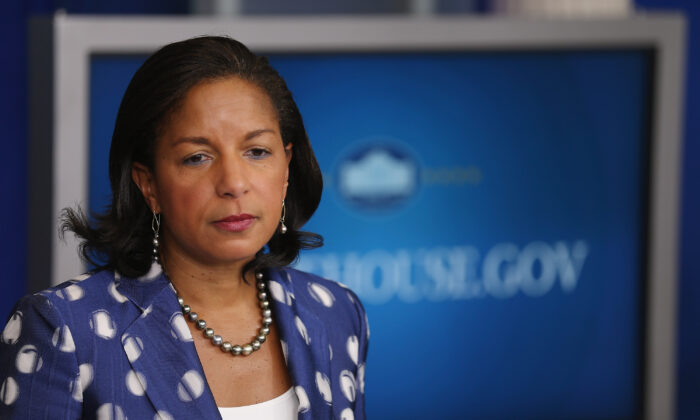 Susan Rice, Obama’s national security adviser and now the “top adviser to the president on domestic policy and related decisions,” has admitted to participating in the unmasking of members of the Trump transition team. Unmasking is the process in which a U.S. citizen’s identity is revealed from collected surveillance.

Initially, Rice publicly denied the allegations, claiming that “I know nothing about this. I was surprised to see reports from [House Intelligence Committee] Chairman [Devin] Nunes on that count today.” Two weeks later, Rice stated that she hadn’t done so for “for any political purposes.” It was later reported that Rice told House investigators that “she unmasked the identities of senior Trump officials to understand why the crown prince of the United Arab Emirates was in New York.”

According to a filing in the Flynn legal case, notes from FBI Agent Peter Strzok revealed that “former President Obama, James Comey, Sally Yates, Joe Biden, and apparently Susan Rice discussed the transcripts of Flynn’s calls and how to proceed against him. Mr. Obama himself directed that ‘the right people’ investigate General Flynn.” According to Strzok’s notes, it also appears that “Biden personally raised the idea of the Logan Act” that would initially be used to pursue Flynn.

Rice, whose level of participation in the spying on the Trump 2016 campaign still isn’t fully known, sent herself an email on Obama’s last day in office detailing events that took place during that meeting. In addition to Flynn, Rice also noted that Obama asked his team to be “mindful to ascertain if there is any reason that we cannot share information fully [with the incoming Trump team] as it relates to Russia.”

Meanwhile, Samantha Power, who served as U.S. ambassador to the United Nations in the Obama administration, has been named nominated to lead the U.S. Agency for International Development. She hasn’t yet been confirmed.

According to a July 27, 2017, letter to then-Director of National Intelligence Dan Coats, Rep. Nunes (R-Calif.) noted that “one official, whose position had no apparent intelligence-related function, made hundreds of unmasking requests during the final year of the Obama administration.” That official was later identified in the media as Power. For her part, Power has denied that she was the person making the unmasking requests.

In addition to the better-known names from the Obama administration, there are other lesser-known members of the new Biden administration who had played roles, sometimes crucial ones, in the surveillance of the Trump transition team.

John Carlin, currently the acting deputy attorney general, is involved in the Justice Department (DOJ) investigation into the events of Jan. 6 at the U.S. Capitol. He recently confirmed that more than 300 people have been charged in connection with the events of that day and more than 280 have been arrested. Carlin told reporters on Feb. 26 that the investigation is “moving at a speed and scale that is unprecedented.”

Earlier in his career, Carlin was the deputy chief of staff and counselor to then-FBI Director Robert Mueller, who would later be appointed as special counsel during the Trump administration.

During the Obama administration, Carlin was the assistant attorney general for national security and head of the DOJ’s National Security Division (NSD) from April 2014 through October 2016 and was involved in the FBI’s Crossfire Hurricane investigation of the Trump campaign.

According to testimony by FBI lawyer Lisa Page, Carlin was receiving briefings on both the Clinton and the Trump investigations directly from FBI Deputy Director Andrew McCabe. Page testified that Carlin “was kept abreast of the sort of investigative activity that was going on” and said that “Carlin might call over to Andy McCabe, and sort of make his team’s pitch.”

As part of this process, Carlin was receiving briefings on the progress of the Foreign Intelligence Surveillance Act (FISA) application on Trump campaign aide Carter Page.

This likely wasn’t the first time that Carlin heard about Page. In March 11, 2016, Carlin and Preet Bharara, the U.S. attorney for the Southern District of New York, released a joint statement noting the guilty plea of Evgeny Buryakov, a Russian intelligence officer convicted of spying.

Carter Page had assisted in this investigation and had met with the FBI on the matter on March 2, 2016. Carlin’s knowledge of Page’s previous assistance to the FBI suggests he would have known that Page wasn’t a Russian agent. This, however, didn’t impede FBI efforts to obtain a FISA warrant on Page on Oct. 21, 2016.

Despite Carlin’s involvement in the Page FISA and the earlier espionage case in which Page had assisted, Carlin stated that his recollection of Carter Page and the FBI’s FISA application on Page was limited when he was interviewed in July 2017 by the House Select Committee on Intelligence.

When asked by then-Rep. Trey Gowdy (R-S.C.) if he had participated in any FISA application related to Page, Carlin stated, “I believe—I believe I did. There’s been so much public reporting since I left, but I remember being involved in the preparation of the FISA application for an individual that was related to the Trump campaign.”

Carlin told Gowdy that “I remember there was one application. I don’t remember whether or not I actually signed it.”

As head of the DOJ’s NSD, Carlin also maintained oversight of the intelligence agencies’ use of Section 702 authority. The NSD and the Office of the Director of National Intelligence (ODNI) jointly conduct reviews of the Section 702 activities every 60 days and the NSD is required to report any incidents of agency noncompliance or misconduct to the Foreign Intelligence Surveillance Court (FISC).

A Jan. 7, 2016, report by National Security Agency (NSA) Inspector General George Ellard disclosed a fundamental issue that appeared to cause issues with oversight of Section 702 data. Ellard noted that the methodology that the DOJ and NSD “have agreed on does not include providing all records of queries performed.” Furthermore, the IG report also found that “controls for monitoring query compliance have not been completely developed” and there was “no process to reliably identify queries” being performed.

The Jan. 7, 2016, IG report notes that the “NSA’s Office of General Counsel (OGC) notified DOJ NSD of the FISA incidents.” However, it doesn’t appear that the NSD ever disclosed the IG report to the FISC.

In addition to the IG findings, on March 9, 2016, “DOJ oversight personnel conducting a minimization review at the FBI’s [redacted] learned that the FBI had disclosed raw FISA information” to an undisclosed entity. In an April 2017 ruling, the FISC noted that this unknown division or center was “largely staffed by private contractors” and that these contractors “had access to raw FISA information on FBI storage systems.”

The court also stated that the contractor’s access to raw FISA data appears to have been the “result of deliberate decision making” and the access to FBI systems “was the subject of an interagency memorandum of understanding” that had been “prepared or reviewed by FBI lawyers.” Despite this preexisting multi-agency agreement, “no notice of this practice was given to the FISC until 2016.”

The NSA’s IG report combined with the discoveries on March 9, 2016, prompted an internal compliance review instigated by then-NSA Director Adm. Mike Rogers. On Oct. 24, 2016, Rogers verbally informed the FISA court of the findings from his investigation, which the FISC found to include “significant noncompliance with the NSA’s minimization procedures involving queries of data acquired under Section 702 using U.S. person identifiers.”

The court noted that the “full scope of non-compliant querying practices had not been previously disclosed to the Court” and that preliminary results from additional reviews suggested that “the problem was widespread during all periods under review.”

In its April 2017 ruling, “the Court ascribed the government’s failure to disclose those IG and OCO reviews at the October 4, 2016, hearing to an institutional ‘lack of candor.’”

On Sept. 27, 2016, the day after he filed the annual certifications, Carlin announced his resignation from the DOJ, which would become effective on Oct. 15, 2016. At this time, the FBI’s application of the Page FISA was nearing completion. On Oct. 21, 2016, the DOJ and FBI obtained a FISA warrant on Page. At this point, the FISA court still was unaware of the Section 702 violations.

Biden recently announced that he nominated Victoria Nuland as “undersecretary of state for political affairs”—the third-highest ranking post at the State Department. Nuland has a lengthy history in the State Department and played several roles during the FBI’s investigation of the Trump campaign.

Sometime in the latter half of 2014, Christopher Steele, author of the infamous dossier at the center of the Russia probe, began to informally provide reports he had prepared for a private client to the State Department. One of the recipients of the reports was Nuland, who was then the assistant secretary of state for European and Eurasian affairs.

On July 5, 2016, FBI agent Michael Gaeta traveled to London and met with Steele at the offices of Steele’s firm, Orbis. At some point in early July, Steele’s early dossier reports were passed to Nuland and the State Department—possibly through Jonathan Winer, then a State Department official who was friends with Steele, perhaps through Gaeta or possibly through Steele himself.

During an interview, Nuland said that “in the middle of July, when he [Steele] was doing this other work and became concerned … he passed two to four pages of short points of what he was finding and our immediate reaction to that was, this is not in our purview. This needs to go to the FBI if there is any concern here that one candidate or the election as a whole might be influenced by the Russian Federation.”

She later said these documents were passed on at some point to both the FBI and Secretary of State John Kerry.

Nuland was later briefed on the larger Steele dossier during a meeting with an associate of Sen. John McCain, David Kramer, in December 2016. Kramer said that McCain instructed him to meet with Nuland and Russian Affairs Director Celeste Wallander. The purpose of the meeting was to verify whether the dossier “was being taken seriously.”

Kramer said he didn’t physically share the dossier with them at this point, but met again with Wallander, a National Security Council member, “around New Years” and “gave her a copy of the document.”