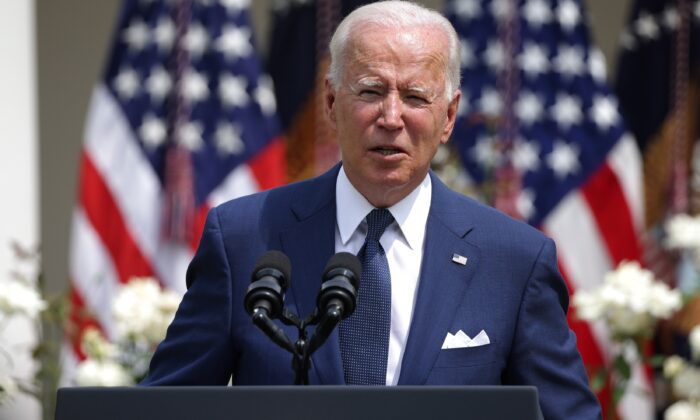 President Joe Biden delivers remarks during an event in the Rose Garden of the White House on July 26, 2021. (Anna Moneymaker/Getty Images)
Executive Branch

Biden Admin: National COVID-19 Vaccine Mandate ‘Not Under Consideration at This Time’

“A national vaccine requirement is not under consideration at this time. That’s where we are with that,” deputy press secretary Karine Jean-Pierre said at a press briefing at the White House on July 30.

Biden was asked a question by a reporter about whether states and municipalities should adopt a COVID-19 vaccine mandate, to which he replied: “I don’t know that yet.” That triggering speculation that the federal government may be concocting such a policy.

“I’d like to see them continue to move in that direction, and that’s why I point it out. I had asked the Justice Department to determine whether that is—they’re able to do that legally, and they can,” Biden said, without providing details. “Local communities can do that. Local businesses can do that. It’s still a question whether the federal government can mandate the whole country. I don’t know that yet.”

How such a policy would be implemented isn’t clear.

Some major corporations have demanded that their employees get vaccinated against COVID-19 by a certain date or be terminated, or at the very least, forced to wear masks, undergo routine testing, and engage in social distancing. Some businesses, meanwhile, have said that customers who enter their buildings must provide proof of vaccination.

Vaccine passport-style systems have been near-universally panned by Republican elected officials, civil liberties groups, and even the World Health Organization.

Biden on July 29 said that the federal government will push its employees to get the vaccine, but the U.S. Postal Service union has opposed the mandate.

In recent days, the Biden administration has been criticized by public health experts and even some mainstream news outlets for what they’ve described as poor messaging around mask-wearing and vaccines. The president’s comments about a national vaccine mandate, Jean-Pierre’s comments about possibly going into a lockdown, and the Centers for Disease Control and Prevention (CDC) delaying the release of a study it cited to recommend mask-wearing again all drew flack.

On July 30, Jean-Pierre reiterated that Biden doesn’t want to push for another lockdown. A day earlier, Biden said he wants schools to reopen.

“The way we see this is that we have the tools in our tool belt to fight this variant,” Jean-Pierre said during a press conference. “And we are not going to head towards a lockdown.”