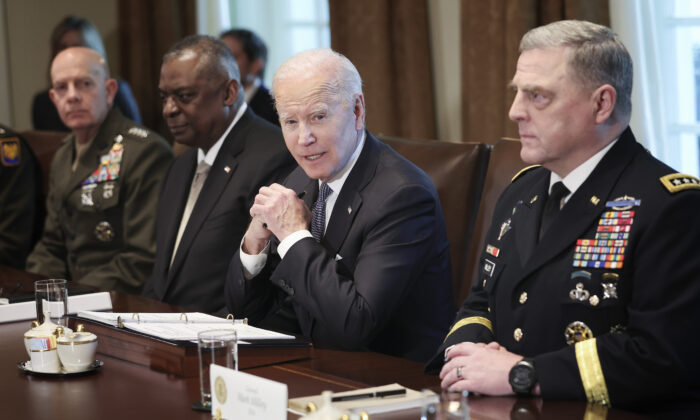 As the U.S. military rolls out its new fitness test, which imposes different physical standards and requirements for men and women, longtime defense analysts and observers say that the push for diversity and inclusion—a trend that accelerated under President Barack Obama and that the Biden administration has aggressively carried forward—undermines combat training and readiness.

“The Biden administration has assigned priority to diversity, inclusion, and equity as the primary criteria. That is a key decision and from it flows everything else that is problematic” in the military today, said Elaine Donnelly, founder and president of the Center for Military Readiness, a public policy organization in Livonia, Michigan.

Donnelly views the Diversity and Inclusion Strategic Plan 2021 released by the U.S. Special Operations Command (USSOCOM) as providing a good measure of the new priorities. The plan’s “Strategic Objective 2” is to “educate USSOCOM professionals and leaders to help facilitate and sustain a diverse and inclusive culture.” Another of its goals is to “increase hiring rates of diverse applicants.”

The plan sets forth a far-reaching plan “to address and remediate bias” and calls diversity and inclusion “a strategic imperative” numerous times in the course of just 20 pages, Donnelly noted.

Under Biden, the military has pushed a wide range of imperatives and priorities that have little to do with the traditional function of training soldiers to be as effective in combat as possible and to minimize U.S. casualties, observers say. But it would be a mistake to think that the current administration has taken a new direction when it’s carrying on and expanding directives, policies, and programs that flourished under Obama.

“It seems like a third term for Obama on this score. We have a president who says that climate change is the greatest threat to U.S. security, who has reversed President Trump’s executive order banning teaching service members racially divisive concepts that sometimes go by the name ‘critical race theory,’ and who has lifted all restrictions on service by transgender persons (and promised to fit the bill for transitions),” said Kingsley Browne, a law professor Wayne State University in Detroit and author of the book “Co-Ed Combat: The New Evidence That Women Shouldn’t Fight the Nation’s Wars.”

Browne sees the policy and cultural shifts within the military not just as the work of one president or cabinet official bent on promoting a “woke” agenda, but as an agenda that many military officials at different levels of command have endorsed, whether because they believe in it or because they are conscious of the impact that their stance on these issues will have on their career.

“We have a chairman of the Joint Chiefs of Staff who talks about ‘white rage’ and a Special Operations Command that has declared that ‘diversity and inclusion are operational imperatives,’” Browne said. “Consistent with past practice, commanders are routinely evaluated by how well they satisfy diversity imperatives, even if those imperatives diminish readiness.”

The new Army Combat Fitness Test (ACFT) is undergoing implementation just as controversy develops around gender-integrated training in another area of the services, namely the Air Force. An unnamed female trainee who recently left the Air Force’s Combat Control School reportedly wrote in an April 2021 memo that instructors lowered fitness standards to accommodate her.

The new ACFT, which has lower physical standards than its predecessors—requiring, for example, the ability to do nine push-ups instead of 10—and different requirements for men and women in categories such as strength, endurance, and running speed, didn’t come into being overnight. Rather, it is the end result of a long-running effort to scrap standards and expectations that men were more likely to be able to meet, observers say.

In December 2015, then-Defense Secretary Ashton Carter ordered the opening of all combat roles in the military to women within 30 days, denying a request from the Marine Corps for a partial exemption from the order for certain roles such as infantry and fire support reconnaissance. By the end of the 30-day period, all branches of the armed forces had to present Carter with their implementation plans for gender integration.

“Fully integrating women into all military positions will make the U.S. armed forces better and stronger,” Carter stated at the time, though he acknowledged that “there will be problems to fix and challenges to overcome.”

The official response to those who expressed concern about the realism of Carter’s plan was to offer assurances that standards for physical fitness and ability were and would remain gender-neutral, Browne said. But physical differences between the genders in areas such as upper-body strength and stature meant that things didn’t always play out as the advocates of diversity had hoped.

“The choice made after 2015 was to try to thread the needle between these two options—to make it not too hard but not too soft. But even with that compromise, you still had a disproportionate number of women who failed the test.”

Faced with these difficulties in bringing about the complete gender integration ordered by Carter, lawmakers in Congress commissioned a RAND Corporation study, which set out to address the question of whether soldiers of all ages and genders should be subject to the same standards of physical fitness. The study came to the conclusion that a gender-normed Army fitness test would “ensure parity in pass rates between groups, but it would also require the Army to accept differences in potential combat readiness among soldiers who are held to different testing standards.”

The new ACFT that the Army is now in the process of implementing doesn’t impose standards that anyone hoping to be a soldier must meet, as in the past, but instead sets forth varying standards for men and women and for people of different ages, Browne noted. He sees the name of the test as something of a misnomer, given that it doesn’t really seek to gauge how well people can perform combat tasks but rather to measure general physical fitness. It sets maximum and minimum scores on the basis of percentiles within the category, or “cohort,” in question. It sets a passing score at the fifth percentile for an age and sex cohort, which Browne considers a low bar, and a maximum score at the 96th percentile.

One illustration of the problems inherent in the new test, in Browne’s view, is the “sprint-drag-carry” test, which purports to measure not just a single aptitude but, instead, strength, agility, endurance, and aerobic maneuvering. The test allows an 18-year-old woman to pass with a time of 3 minutes and 15 seconds, but a man must take no longer than 2 minutes and 28 seconds in order to pass.

On a battlefield, heavy ordnance or the body of a wounded soldier that has to be moved under fire to safety doesn’t make allowances based on the gender of the soldier who has to perform the task. In light of this reality, Army officials haven’t explained how the test is useful or relevant.

“Who do you want to be trying to extract you and move you to safety if you’re wounded?” Browne said. “I guess the Army’s answer is that it doesn’t matter, because both potential rescuers are equally ‘fit.’”

The new norms aren’t the only impediment to readiness in a military where officers face intense political pressure to pass women, Browne and others believe.

“Even without gender-norming of the physical tests referred to above and using the same standards for men and women, it is still possible to cheat. There is a widespread belief that women are often given extra chances to pass training, especially in the special operations forces,” he said.

In corroboration of this view, journalist and defense analyst Susan Katz Keating wrote an exposé for People magazine in 2015 reporting her findings that two women who passed the Army’s elite Ranger School at Fort Benning, Georgia, received special treatment, and instructors gave them a pass even after infractions for which male trainees were disqualified. This exposé came on the heels of People’s reporting that Rep. Steve Russell, then a Republican congressman for Oklahoma, had become concerned about reports of a gender-based double standard in Ranger training and had asked the Department of Defense for documents relating to the two female candidates, Kristen Griest and Shaye Haver.

Among Keating’s findings were that Griest and Haver were able to take a special preparatory two-week pre-training course that male trainees weren’t allowed to take; that they received direct personal counseling and encouragement from an experienced Ranger that wasn’t available to their male peers; that they were allowed to repeat patrols after making mistakes that disqualified male candidates; and that Griest herself expressed surprise that she and Haver passed the course after failing a key segment of training at Fort Benning, not once but twice.

Keating agrees with Browne that the changes pushed heavily under the Obama administration have grown even more pronounced under Biden.

“The Biden administration has taken previous policies and amplified them. For example, soon after Biden came into office, he reversed the existing policy on transgender troops, opening the door for them to serve openly, and also to go through the transition process, including surgery, on the public’s dime,” Keating said.

Keating also sees relatively little dissent in the services over the change in course.

“From what I’ve seen in several branches, the service members disagree with many of the policies but are keenly aware that they are working within a command structure that doesn’t ask them to vote on policies. When it comes to policies, the services don’t ask, they tell,” Keating said.

Besides the effects on what happens during training and the standards and requirements involved, the cultural shift within the military in favor of diversity, inclusiveness, and equity has caused far-reaching changes in how candidates for military service spend their time. In Browne’s view, the time that trainees spend learning about critical race theory, implicit bias, politically correct pronouns, and microaggressions—instead of traditional things like firing with precision or scaling obstacles with full-body gear—comes with a steep price.

“Any time that personnel are diverted away from training aimed at making the military more combat-effective has a cost,” Browne said. “I think that a lot of people who are unfamiliar with the military assume that when personnel are not deployed, they are just sitting around with nothing to do.

When the inculcation of critical race theory—a Marxist-rooted framework that views the United States as a systematic “oppressor” of ethnic minorities—and new doctrines are priorities, Browne also sees a severe effect on morale and cohesion within military units. While the goal of training in the past has been to promote unity, doctrines that divide trainees into categories of oppressed and oppressors are unlikely to foster a sense of shared purpose, he said.

The Department of Defense didn’t respond to a request for comment.