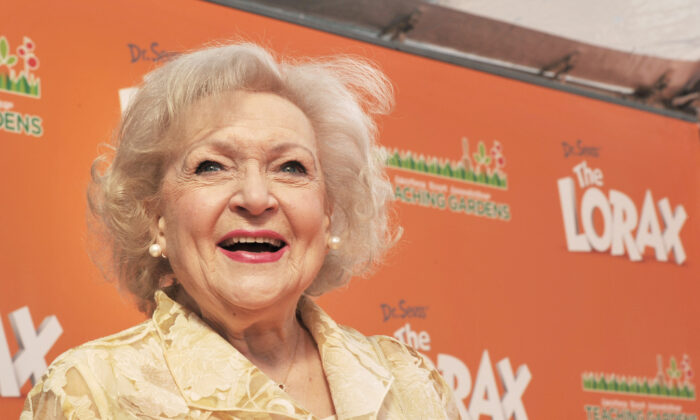 Betty White, a television actress whose career spanned decades, died at age 99, according to her agent in a statement on New Year’s Eve.

“Even though Betty was about to be 100, I thought she would live forever,” agent Jeff Witjas said in a statement to People magazine.

He added: “I will miss her terribly and so will the animal world that she loved so much. I don’t think Betty ever feared passing because she always wanted to be with her most beloved husband Allen Ludden. She believed she would be with him again.”

White’s cause of death was not detailed in the statement.

The actress, who most notably appeared in “The Golden Girls” sitcom, would have turned 100 on Jan. 17.  She also appeared in “Hot in Cleveland” and “Boston Legal” in recent years.

In 2014, Guinness World Records confirmed that White had the longest television career for a female entertainer. During her first role, White appeared on an episode of a December 1930 radio program called “Empire Builders” when she was 8 years old, and she later started appearing on television in 1939.

“I danced on an experimental TV show, the first on the West Coast, in downtown Los Angeles,” she told Guinness World Records of the 1939 appearance. “I wore my high school graduation dress, and our Beverly Hills High student body president, Harry Bennett, and I danced the ‘Merry Widow Waltz.'”

She was born Betty Marion White in Oak Park, Illinois, and the family moved to Los Angeles when she was a toddler.

“I’m an only child, and I had a mother and dad who never drew a straight line: They just thought funny,” she told The Associated Press in 2015. “We’d sit around the breakfast table and then we’d start kicking it around. My dad was a salesman and he would come home with jokes. He’d say, ‘Sweetheart, you can take THAT one to school. But I wouldn’t take THIS one.’ We had such a wonderful time.”

In 1985, White starred on NBC with Bea Arthur, Rue McClanahan, and Estelle Getty in “The Golden Girls.” Its cast of older actresses, playing single women in Miami retirement, presented a gamble in a youth-conscious industry. But it proved a solid hit and lasted until 1992.

White played Rose, a gentle widow who managed to misinterpret most situations. She drove her roommates crazy with off-the-wall tales of a childhood in fictional St. Olaf, Minnesota, an off-kilter version of Lake Wobegon.

The role won her another Emmy, and she reprised it in a short-lived spinoff, “The Golden Palace.”

After her co-star Arthur died in 2009, White told Entertainment Tonight: “She showed me how to be very brave in playing comedy. I’ll miss that courage.”

She also appeared in numerous miniseries and TV movies and made her film debut as a female U.S. senator in Otto Preminger’s 1962 Capitol Hill drama “Advise and Consent.”