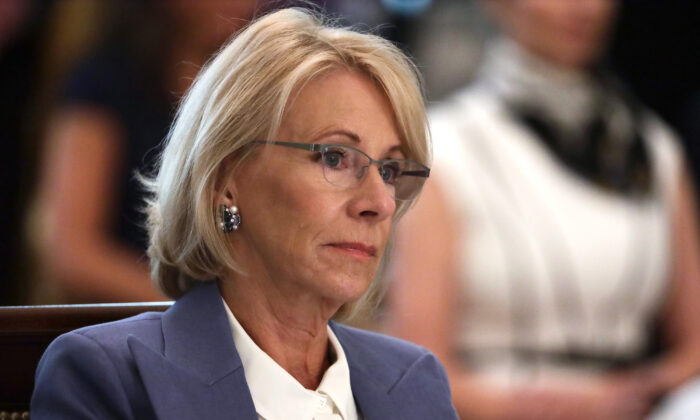 U.S. Secretary of Education Betsy DeVos listens during a cabinet meeting in the East Room of the White House in Washington on May 19, 2020. (Alex Wong/Getty Images)
Education & Family News

Education Secretary Betsy DeVos on Tuesday warned in an op-ed that “insidious lies” about U.S. history are being taught in American schools, praising the Trump administration’s effort to counter such anti-American indoctrination.

The CCP (Chinese Communist Party) virus pandemic, while disrupting the education of American students with widespread school closures, has also made parents increasingly aware that their children are learning “outright anti-American material,” according to DeVos’s op-ed for Fox News.

DeVos specifically called out the Pulitzer Prize-winning 1619 Project, which she described as “a debunked reframing of history.”

Spearheaded by New York Times reporter Nikole Hannah-Jones, the project centers around the idea that the United States is an inherently racist nation built upon slavery. It consists of a collection of essays that argue, among many other controversial claims, that the republic’s founding ideals of liberty and equality “were false when they were written,” and that the primary reason for the American Revolution was to preserve slavery.

“From the beginning, this historical revisionist campaign was intent on infiltrating America’s schools and infecting young American minds,” DeVos wrote. “It was easier to do because so few students were learning history or civics as they should.”

DeVos also highlighted the lack of reasonable knowledge of U.S. history among high school students, pointing to the latest national assessment report which shows that most eighth-graders don’t know what the Lincoln-Douglas debates were about.

She then praised the 1776 Commission, a presidential initiative in response to the 1619 Project, for meeting parents’ demand to make the pursuit of freedom, instead of slavery, the center of the national narrative again.

“The 1776 Commission, which President Trump launched recently, will help focus the national conversation on the great American story and the importance of ensuring the rising generation understands the values of our founding, the contents of our Constitution, and the critical need to be engaged citizens,” DeVos said.

The Tuesday op-ed comes after DeVos reportedly told the staff of her department to “be the resistance” against what is not in the interest of students in the event of a leadership change.

“Let me leave you with this plea: Resist,” DeVos said, reported Politico, citing a recording of a Dec. 15 meeting. “Be the resistance against forces that will derail you from doing what’s right for students. In everything you do, please put students first—always.”