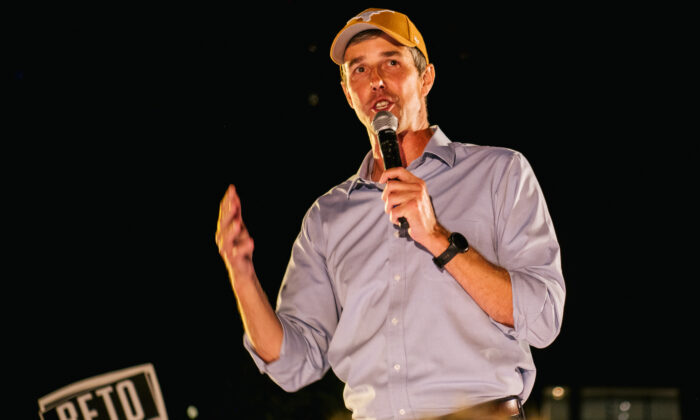 Beto O’Rourke has blamed Joe Biden’s actions during the 2020 election as playing a part in Latino voters’ rightward political shift in recent years.

“Candidate Biden didn’t spend a dime or a day in the Rio Grande Valley—or really anywhere in Texas, for that matter—once we got down in the homestretch of the general election,” O’Rourke said at the Texas Tribune Festival on Sept. 24.

The rightward shift of Hispanic and Latino voters made headlines in the 2020 election.

Trump saw more support from Latino voters in 2020 than in 2016. According to Pew Research, Trump moved from 28 percent to 38 percent approval among Hispanic voters, a gain of 10 percent. Biden, meanwhile, earned 59 percent of the Hispanic voters, down from 62 percent Democratic nominee Hillary Clinton received in her 2016 election.

Latino Vote to Determine Outcome of Dozens of 2022 Midterm Races

In South Texas, a historically Democratic stronghold, Hispanic votes shifted significantly. For example, Zapata County, where Clinton won by 33 percentage points in 2016, flipped to Trump in 2020.

“Republicans showed up with a very strong, compelling economic message,” O’Rourke said Saturday when asked why the Hispanic voters in Texas shifted to GOP candidates.

“From Trump, it was literally one syllable, one word,” O’Rourke continued. “It was ‘jobs,’ and he kind of offered a false choice: ‘I can either keep you holed up in your house during this pandemic, or I can open up all places of employment and prioritize the economy.’”

“What did we have on our side? Nothing,” he added.

The momentum Republicans gained among Hispanics appears to be sustained in Texas so far. In a June special election, conservative Republican Mayra Flores defeated Democrat Dan Sanchez by roughly eight percentage points. Flores became only the second Republican to ever win in a Rio Grande Valley congressional district and the first Mexican-born Republican ever elected to Congress from Texas.

O’Rourke, who is facing off against Republican Gov. Greg Abbott in the upcoming midterm election, said he would not repeat the same errors Democrats made two years ago.

“I am making sure that we do not commit the same sin as some Democrats before me have committed, which is take voters of color—Black voters and Latino—for granted,” he said, adding that his Spanish language skills gave him a “competitive advantage.”

Recent polls show the democratic candidate is falling behind Abbott, who is seeking a third term as governor. According to a poll released on Sept. 19 by The Dallas Morning News and the University of Texas at Tyler, Abbott had a lead of 9 percentage points over O’Rourke.

But the 49-year-old shrugged off the survey results.

“I take these polls with a grain of salt,” he said.

John Haughey contributed to the report.