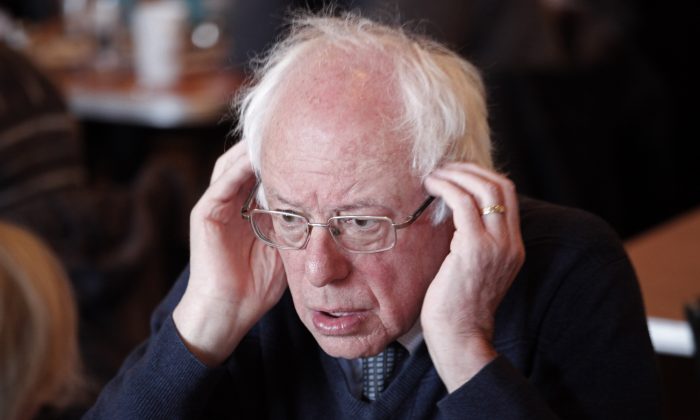 Bernie Sanders got pressed about specific policies on economic reform in an interview by the New York Daily News editorial board on April 1.

One of the major points of Sanders’s message is the unfairness of the banks, and in the interview Sanders stumbled over key questions pertaining to his core message about the break up of the banks.

The interview started by asking specific questions about the way in which major corporations ruin the “moral fabric of America.”

Daily News staff asked Sanders if he thought Apple, Inc., is destroying the fabric of America.

Bernie Sanders: No, Apple is not destroying the fabric of America. But I do wish they’d be manufacturing some of their devices, here, in the United States rather than in China. And I do wish that they would not be trying to avoid paying their fair share of taxes.

This followed with an inquiry on another of Sanders’s main points, that is, the break up of big banks, specifically JP Morgan Chase:

Sanders: How you go about doing it is having legislation passed, or giving the authority to the secretary of treasury to determine, under Dodd-Frank, that these banks are a danger to the economy over the problem of too-big-to-fail.

Daily News: But do you think that the Fed, now, has that authority?

Sanders: Well, I don’t know if the Fed has it. But I think the administration can have it.

Daily News: How? How does a President turn to JPMorgan Chase, or have the Treasury turn to any of those banks and say, “Now you must do X, Y and Z?”

Sanders: Well, you do have authority under the Dodd-Frank legislation to do that, make that determination.

Daily News: You do, just by Federal Reserve fiat, you do?

Sanders: Yeah. Well, I believe you do.

Later in the interview, the Vermont senator stumbled over a question concerning the way he would go about indicting responsible people on Wall Street, which is a centerpiece to his campaign.

Daily News: Okay. But do you have a sense that there is a particular statute or statutes that a prosecutor could have or should have invoked to bring indictments?

Sanders: I suspect that there are. Yes.

Daily News: You believe that? But do you know?

Sanders: I believe that that is the case. Do I have them in front of me, now, legal statutes? No, I don’t. But if I would … yeah, that’s what I believe, yes. When a company pays a $5 billion fine for doing something that’s illegal, yeah, I think we can bring charges against the executives.

Daily News: I’m only pressing because you’ve made it such a central part of your campaign. And I wanted to know what the mechanism would be to accomplish it.

Pivoting away from the question, the presidential candidate reiterated his main point, that the model used in Wall Street is “fraudulent.”

Sanders: Let me be very clear about this. Alright? Let me repeat what I have said. Maybe you’ve got a quote there. I do believe that, to a significant degree, the business model of Wall Street is fraud.