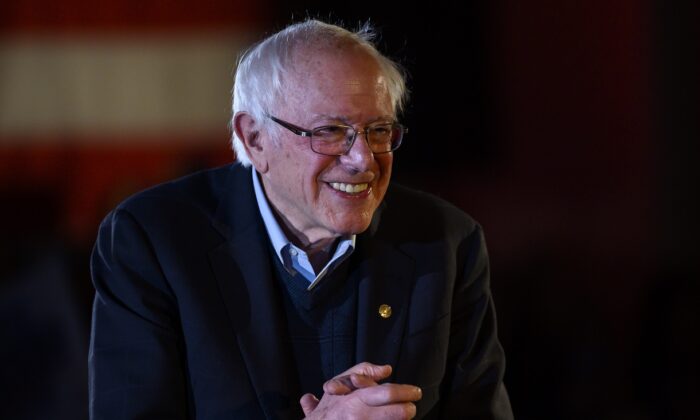 Bernie Sanders Is Miseducating Our Youth

Sen. Bernie Sanders (I-Vt.) led the Democratic candidate fundraising pack for the fourth quarter of 2019 with a stellar $34.5 million, much of it coming in small donations.

Good for Bernie but bad for us, because, as usual, the group making the largest number of these contributions is teachers.

While it’s unclear what percentage of these teachers are kindergarten, college, or something in between, it’s highly likely that a great many are sympathetic to Bernie’s credo of socialism and are imparting that system, consciously or not, to our children from their early years onward.

Ironically, this comes at a time when evidence abounds that socialism is an often-disastrous failure on many levels and capitalist free-markets are a resounding success.

We have in front of us the tragedy of Venezuela—once the richest country in Latin America—where, under their brand of Bernie-applauded socialism, its people are now starving. (Sanders refused to call strongman Nicolás Maduro a dictator.)

Even the Scandinavian countries that Bernie says he admires are fleeing socialism, lowering their corporate tax rates.

Under the resolutely pro-market Trump administration, unemployment rates are at a 50-year low with long-moribund workers’ wages increasing at 3.7 percent. Paychecks, in general, are growing at the fastest pace in a decade, with median household income hitting a record high of $65,084.

One wonders if the crowd of Bernie supporters knows any of this, and if they do, if they even care. They may have been indoctrinated by Sanders and others with a form of class vengeance that makes logic, or even self-interest, irrelevant.

I remember attending a Bernie speech at Des Moines College during the 2016 election. I thought I was in a time warp back on the Berkeley campus circa 1965 and was listening to then-famous student activist Mario Savio inveigh against the evils of capitalism. The audience consisted of college kids and aging hippies still in ’60s attire, all of whom were eating up every word Bernie uttered.

It struck me at the time that I was watching a form of child abuse, Sanders inculcating almost entirely discredited and economically self-defeating ideas into the naive heads of college students.

Hypocrisy abounded. One of his subjects was the danger of billionaires in politics. The kids were clueless that the event itself was sponsored by billionaire George Soros. (I made a video about this. Watch it here. It’s amusing in a black comic way.)

In an odd parallel, I was in the Soviet Union twice on cultural exchanges about the time Sanders took his honeymoon there. We must not have been in the same country. I felt like I was in a huge jail. Indeed, several Soviet writers came to me and quietly asked if I could help them get out. Of course, I couldn’t and felt terrible.

Meanwhile, Bernie was celebrating the greatness of it all, taking off his shirt and singing “This Land Is Your Land.”

But Bernie, too, shall pass. What won’t is what has happened to our educational system. Besides this credulous and unsophisticated advocacy for socialism, it’s being dumbed down at every turn, even basic math being accused of being a product of white privilege.

The dangers inherent in this are manifold. Our competitors in China and Russia must be laughing. We like to think the future will be American. But if this tendency continues, it won’t be. We would be on the road to our own Venezuela.

One of the great challenges for a second Trump administration will be to unwind this trend. So far, not nearly enough has been done. The administration has the power of the purse since nearly every college and university has made itself dependent on federal aid (Hillsdale College being an honorable exception). The administration should withhold funds until our schools stop being near-indoctrination camps.

As with elections, it should be up to the people how they should be educated, not so-called elites or self-described “democratic” socialists.