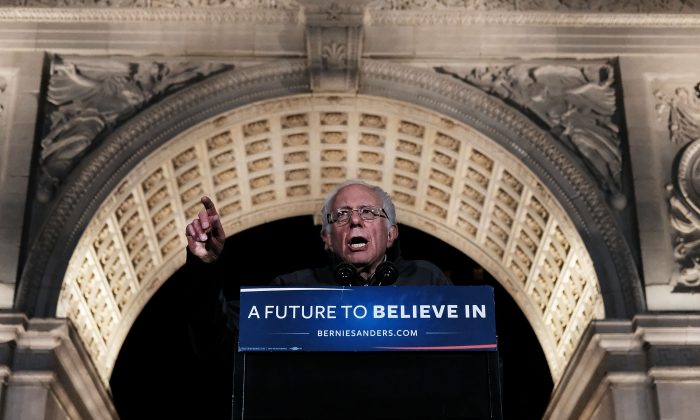 Democratic Presidential candidate Bernie Sanders speaks under the arch at historic Washington Square Park to thousands of people at a rally on April 13, 2016 in New York City. (Photo by Spencer Platt/Getty Images)
Politics

Bernie Sanders Filled Washington Square Park, and Then Some

NEW YORK—In the early evening of April 14, the lines stretched from University Avenue, wrapped around Washington Square South, up Laguardia Place, and down Thompson St.

This was no music festival, however—this was a Bernie Sanders rally.

Bernie is the ultimate underdog in the race.
— Devonnie

“If everyone comes out to vote, he’s got a chance” said Devonnie, a 22 year old Access-a-Ride driver from Crown Height who also went to the rally in the Bronx last month.

“Bernie is the ultimate underdog in the race” he said as he talked about the way the media coverage of the Democrats included the superdelegates into the total count—a common grievance among Sanders supporters.

By the numbers, Sanders remains the underdog going into the New York primary, trailing Hillary Clinton both in superdelegate count—469 to 31—and in pledged delegate count—1,307 to 1,097.

He is also trailing by double digits in polls taken in the state—RealClearPolitics have him behind Clinton 53 percent to 39 percent in a polling average.

FiveThirtyEight has Clinton at a 99 percent chance of winning based on polls and endorsements.

Generally, the math is stacked against him.

Tim Robbins, who said that he once rallied in Washington Square Park “to protest the Vietnam War,” spoke about how people were “supporting Hillary with their pragmatic selves,” drawing loud boos from every direction.

Rosario Dawson, Nina Turner, and Spike Lee also spoke, but those were opening acts for the main event—Bernie Sanders, who took to the stage as the sun went down and the temperatures lowered drew loud cheers and immediately everyone got out their phones to record the moment:

“Jane and I left New York City when we were kids—it is great to be back.”

Sanders spoke with a gravelly tiredness that noticeably dissipated as he warmed up and got into the body of his stump speech, which called for a “political revolution” and multiple denunciations of “corporate greed and the rigged economy.”

Pope Francis Is Not Scheduled to Meet With Bernie Sanders

He also championed raising the minimum wage to $15, and lowering the prices of college tuition—a topic close to the heart of NYU students, who pay around $60,000 a year.

A large portion of his speech focused on social justice. He talked about the Stonewall Riots—he was blocks away from the Stonewall Inn—the water crisis in Flint, Michigan, and pushed for racial unity:

“When we stand together—black and white and Latino and Asian American—when we do not allow the Donald Trumps of the world to divide us up, there is nothing we can’t accomplish,” he said.

A standout moment was when Sanders called for Clinton to release the transcripts to her $225,000 Goldman-Sachs speeches, which he said “must be a speech written in Shakespearean prose.”

Devonnie said that he believed if Hillary Clinton released those speeches “it would destroy her campaign”—saying it would be comparable to Mitt Romney’s 47 percent comment from the 2012 election.

Another topic that Sanders took a hard line against was inequality of pay with women, with a line that everyone around began echoing:

“Women are not going to be working for 79 cents on the dollar compared to men. Women in America want the whole damn dollar.”

Epoch Times asked Devonnie and another member of the audience—Lawerence Tandol a student from Westchester, New York—what they thought their chances were that Sanders would be the Democratic nominee.

“40 percent,” chimed in another member of the audience.

“Let me change that to 60 percent,” said Tandol, who quickly pulled up on his phone the results to the Western Illinois Mock Election.

He explained that the mock election has predicted every election since 1975 and that they had predicted Bernie Sanders as the next president.

“Even if he didn’t win,” said Tandol with a smile, waving a “Feel the Bern” flag, “he’s already won.”