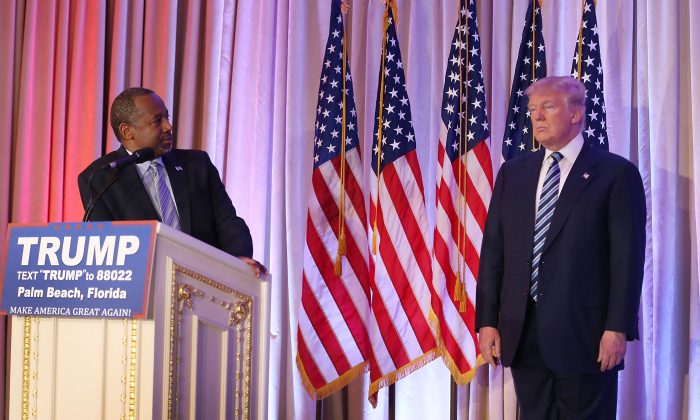 Trump says he's setting up a committee.
By Steven Klett

Presumptive Republican nominee Donald Trump said a day after winning the Indiana primaries that he’s going to set up a committee to help vet potential Vice Presidential candidates, and that Dr. Ben Carson is going to be on that committee.

“I’ll set up a committee,” Trump told the Times. “I think on the committee I’ll have Dr. Ben Carson and some other folks.”

Carson, a retired neurosurgeon, made a bid for the Presidential nomination, but dropped out in March. He has since endorsed Donald Trump and been one of Trump’s most recognizable surrogates.

Other names that have been tossed around are Chris Christie, Newt Gingrich, and Susana Martinez.

Recently, Trump has said that his running mate should be a “political” person rather than someone in business or the military:

“I’m more inclined to go with a political person,” Mr. Trump said. “I have business very much covered.”

He added, “I think I’ll be absolutely great on the military and military strategy.”

When talking to CNN’s Wolf Blitzer he said that he would vet John Kasich:

“I would be interested in vetting John. I like John. I’ve had a good relationship with John. I’ve gotten along with him well.”

Trump also posited the hypothesis that the Ohio governor stayed in the race so long because “he likes the food in California.”

That’s in reference to Kasich’s propensity to take interviews while he’s eating food which Trump has called “disgusting.”

This was shortly before Kasich announced that he would be making a statement, with numerous sources reporting that he’s suspending his campaign.

In a contrary statement, Trump also said in the Times that Kasich was not on his shortlist.

“Despite the fact that he has said generally nice things about Mr. Kasich, the governor of a crucial battleground state, Mr. Trump said that the governor was not currently on his short list. “Not at this moment,” Mr. Trump said.”

Trump also said that the process for vetting the eventual running mate would probably not be decided until July.