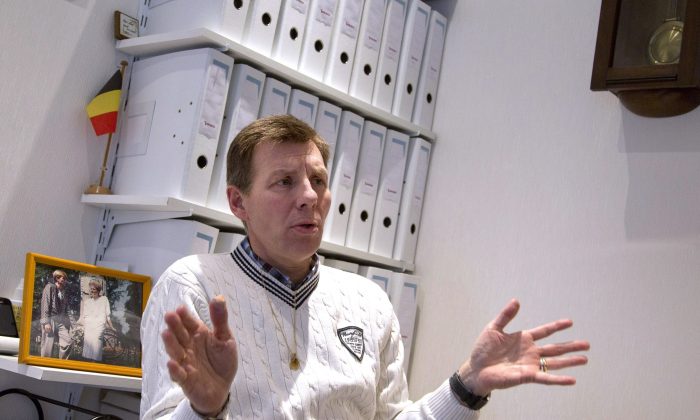 FILE - In this Feb. 7, 2014 file photo, Belgian doctor Marc Van Hoey, a general practitioner who is president of the Right to Die Association in the region of Flanders, speaks with the Associated Press at his practice in Antwerp, Belgium. A terminally-ill minor has become the first juvenile who has been helped to die in Belgium since it removed age restrictions on euthanasia two years ago. Senator Jean-Jacques De Gucht confirmed Saturday, Sept. 17, 2016 that the minor who died was from Belgium's Flemish region and was in the "final stages" of an illness. (AP Photo/Yves Logghe, file)
International

PARIS—A terminally ill minor has been helped to die in Belgium for the first time since the country did away with age restrictions on euthanasia two years ago, according to the senator who wrote the law.

He said the minor was from Belgium’s Flemish region, but declined to provide any further details about the patient to protect the privacy of the grieving family.

Belgium is the only country that allows minors of any age assistance in dying, De Gucht said. In Holland, the lower age limit for euthanasia is 12 years.

“It’s terrible when a youngster suffers, but it gives me some comfort to know that now there is a choice out there for children in the final terminal stages,” De Gucht said. “It’s important that society doesn’t neglect people in such pain.”

The Belgian law has very strict rules for the euthanasia to be approved. It requires the minor to be in the final stages of a terminal illness, to understand the difference between life and death rationally and to have asked to end his or her life on repeated occasions. It also requires parental consent and finally the approval of two doctors, including a psychiatrist.

The law — one of the most far-reaching in the Western world—had wide public support when it was introduced in 2014, but was opposed by some pediatricians and the country’s Roman Catholic clergy.

Catholic teaching forbids euthanasia and the president of the Italian bishops conference on Saturday described the news of the euthanasia of a child as painful and worrisome.

“It pains us as Christians but it also pains us as persons,” Genoa Cardinal Angelo Bagnasco told Italian news agency ANSA.

As House of Representative members in Belgium cast their ballots in 2014 and an electronic tally board lit up with enough green lights to indicate the measure would carry, a lone protester in the chamber shouted “assassins!”

Socialist Hans Bonte at the time said no member of the House hoped the law would ever be used. But he said all Belgians, including minors, deserved the right to “bid farewell to life in humane circumstances” without having to fear they were breaking the law.

Some have questioned whether children should be allowed to make the choice between life and death. In 2014, a group of doctors—including pediatricians—signed a group letter to voice opposition to the measure.

“A lot of people—in whatever profession—still have a problem coping with the idea that people can choose when they end their own life,” De Gucht said.