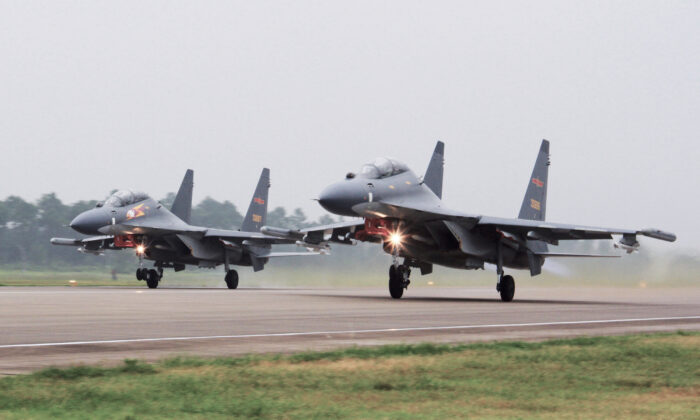 Two Chinese SU-30 fighter jets take off from an unspecified location to fly a patrol over the South China Sea in a file photo. (Jin Danhua/Xinhua via AP)
By Jenny Li

Jenny Li
Jenny Li has contributed to The Epoch Times since 2010. She has reported on Chinese politics, economics, human rights issues, and U.S.-China relations. She has extensively interviewed Chinese scholars, economists, lawyers, and rights activists in China and overseas.
View profile
and Olivia Li

Citing national security concerns, both Canada and the UK have started to examine possible breaches of confidentiality agreements among current and former military personnel following reports that the Chinese regime has been recruiting British military pilots.

The Canadian Department of National Defence (DND) told The Epoch Times on Oct. 27 that it is looking into the issue with its federal partners, and any behavior of its members that harms the Canadian national interest will be dealt with appropriately.

“The Security of Information Act applies to both current and former members, and non-compliance with the Act could result in serious consequences.

“As an institution that upholds democratic principles and the rule of law, we trust and expect current and former CAF members to adhere to the values of the institution,” the DND said.

Under Canada’s Security of Information Act, persons convicted of indictable offenses could be imprisoned for up to 14 years; those convicted on summary conviction could be sentenced to up to one year in prison or a fine of up to $2,000, or both.

In a statement issued to The Epoch Times on Oct. 28, a spokesperson from the UK’s Ministry of Defence (MoD) said that the ministry is taking decisive steps to stop the Chinese regime from attempting to headhunt current and former UK Armed Forces pilots to train Chinese armed forces in China.

“All serving and former personnel are already subject to the Official Secrets Act, and we are reviewing the use of confidentiality contracts and non-disclosure agreements across Defence, while the new National Security Bill will create additional tools to tackle contemporary security challenges—including this one,” the spokesperson said.

Earlier in October, it was reported that around 30 former British pilots are currently helping to train China’s People’s Liberation Army (PLA) with lucrative compensation packages of about $270,000 a year, as reported by The Epoch Times on Oct. 18.

In an article published by the Daily Mail on Oct. 17, an unnamed official said that some Canadian and Australian military pilots have also been lured to China by the Chinese regime.

Additionally, the article states that Beijing had to hire British Royal Air Force pilots through an intermediary named Test Flying Academy of South Africa (TFASA), as any direct approaches by Beijing would be blocked by the UK’s security services.

It was also reported that former U.S. military pilot, Daniel Edmund Duggan, was arrested in Australia on Oct. 21 and is awaiting extradition to the United States, according to an exclusive report by Reuters on Oct. 25, over his working for a Chinese aviation consulting firm from 2017 to 2020.

According to the MoD, Western military pilots recruited by the Chinese regime were required to train Chinese pilots in state-owned defense industry companies and research institutions.

In particular, the report states that Beijing seeks to learn techniques associated with Catapult Assisted Take-Off But Arrested Recovery (CATOBAR) and use them on its Fujian aircraft carrier equipped with the Electromagnetic Launch System.

CATOBAR, used only by the United States and France, is a system used for the launch and recovery of aircraft from the deck of an aircraft carrier.

The Epoch Times reporter was not able to independently verify the details in the Le Figaro report.

‘Handing a Stick to Your Enemy’: Expert

“I can understand the pilots wanting the money, but I cannot see a patriotic pilot doing it for any inducement … It’s unwise for their [pilots] countries to allow them to do that. It is somewhat like handing a stick to your enemy before you get into a fight,” he said.

However, in addition to CATOBAR techniques, Schuster is more concerned that Beijing may attempt to acquire U.S. and other nations’ knowledge of aerial combat.

“I’m more worried about the training in America in Western air-to-air combat tactics, how do we approach combat, (and) what are our tactics and procedures … It’s more than just learning how to take off and land on the carrier, it is about learning the range of combat skills required for a carrier pile,” he said.

“When you look at the way they approach a tactic target, how they penetrate air defenses, and what they do and after they come up from the attack, those are vital tactics that can ensure pilots’ survival … they’re [the Chinese regime] looking to expand their tactical wisdom of experiences and expand their training program in those texts.”

James Heappey, Britain’s Minister of State for the Armed Forces and Veterans, told Sky News earlier in the month that China is a competitor that is threatening the UK’s interests in many places around the world.

“There is no secret in their attempt to gain access to our secrets, and their recruitment of our pilots in order to understand the capabilities of our air force is clearly a concern to us and the intelligence part of the MoD.

“We are going to put into law that once people [British pilots] have been given that warning it will become an offence to go forward and continue with that training (for the Chinese regime),” he said.