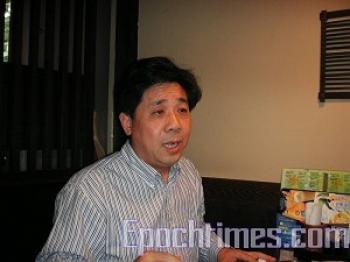 Ren Zhihui
View profile
Follow
biggersmaller
Print
TOKYO—Stranded at the Narita Airport in Japan for three months, Shanghai human rights activist Feng Zhenghu has been eagerly awaiting the opportunity to return to China for the Chinese New Year. Now he has received a letter from All Nippon Airways (ANA) demanding an apology before he is permitted to board a plane. The letter explicitly states that all measures taken regarding his case are based on instructions from the Chinese regime.

The letter, marked with the ANA logo, contains two pages in Japanese followed by two pages of Chinese translation. It states that while Mr. Feng was aboard the flight from Shanghai to Tokyo on November 3, 2009, he yelled loudly on the plane, causing the flight to be delayed for 56 minutes, and resulting in several complaints from passengers. The letter also accuses Mr. Feng of disturbing the peace and illegally lingering inside the Narita Airport. For these reasons, it states, ANA will not let him board any flight until he apologizes.

Mr. Feng said he is very puzzled by the letter: “Isn’t this reversing black and white? The right and wrong is pretty obvious.”

According to Mr. Feng, when he was barred from entering China for the eighth time by the Pudong Airport in Shanghai on November 3, 2009, Shanghai’s Border Inspection officials forcefully carried him onto the ANA flight. When he protested, ANA staff helped Border Inspection officials pin him to the seat. He said that he had not originally planned to highlight the incident, but ANA’s sudden change of attitude is very surprising to him.

He said he does not know if ANA is acting out of some common interest, trying to please someone, or simply willing to act as spies.

Feng was not a born activist. He holds a Master’s Degree in Economics from Fudan University, one of the top universities in China. After studying in Japan for seven years, he went back to China to start his own consulting business. In 2000, he was arrested and sentenced to three years in prison for his publication “Japanese Companies in Shanghai”—a listing of Japanese companies doing business in China.

Why he was arrested and sentenced is not clear. He was convicted of “illegal business activities,” charges he says were trumped up. Hundreds of thousands of Chinese are wrongfully accused and sentenced each year without cause. Mr. Feng’s arrest may have just been part of a general trend.

But the experience of being wrongfully imprisoned turned Mr. Feng into a rights activist. After his release, he continuously appealed for a reversal of his sentence, and in the process, met many others who were trying to appeal their own cases. He started to help the others.

Mr. Feng began writing and published “Brief on Oversight” and “Witness to Judicial Injustices in Shanghai” in 2007, pamphlets calling attention to cases being appealed and demanding that the Chinese regime obey the Chinese Constitution.

According to Ms. Shum Ting, the Chairperson of the League of Chinese Victims, there are about 20 million Chinese citizens currently searching for justice by appealing their cases. Mr. Feng stands out because he is well-educated, has many connections, is a good organizer, and a good writer. And he has shown himself always ready to help others. Finally, he is not afraid of speaking out.

But Feng Zhenghu can hardly be called a dissident. He has never challenged the Chinese regime. He defends rights by appealing to the system to follow its own rules. His work has been non-political.

Currently, Mr. Feng is suing Northwest Airlines and Air China for refusing to let him board, thus, he cannot board flights from these two companies before the Tokyo authorities reach a decision. He said he will know next week whether he can buy tickets from other companies. He plans to hold a press conference February 8 to release the letter from ANA.

Between June 7 and November 3 of last year, Feng was barred from returning to China eight times. On four of those occasions, Air China and Northwest Airlines at the Narita Airport acted on instructions from the Chinese regime. On the other four occasions, he was stopped and forced to fly back to Japan by Chinese Border Inspection officials. On Nov.3, 2009, he refused the offer to apply for entrance into Japan and opted to stay inside the Narita Airport for three months in silent protest. His difficult and prolonged protest was reported by international media.

Late last year, two officials from the Chinese embassy in Japan came to the Narita Airport three times in one week, informing him that the Shanghai government had requested that he first enter Japan, and they would then discuss his return to China.

Feng agreed and officially entered Japan on February 3, 2010. He said his plans for returning home for the Chinese New Year have not changed.