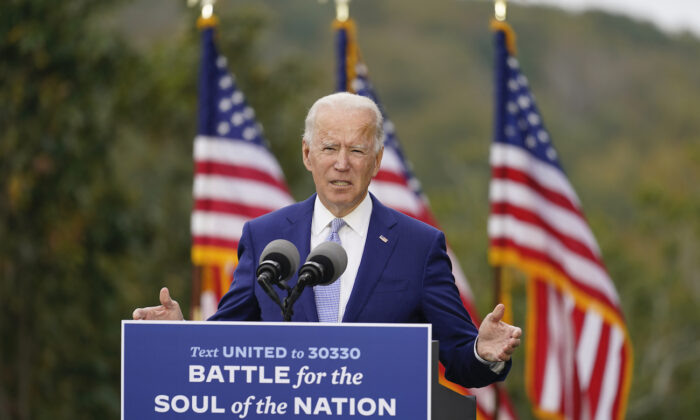 Beijing’s Biggest US Asset Is on the Ballot

The Chinese Communist Party (CCP) is really trying to get you to vote for Joe Biden. They want you to think that your life depends on it. Actually, to a great extent, the survival of the CCP just might depend on it.

There are several reasons why.

For one, Biden has expressed his intent to return to the status quo ante of U.S-China economic relationship. He made that crystal clear in the last presidential debate, among other venues. According to Biden, China, and specifically the CCP, “are not our enemy. They’re good folks.”

There are many sides to that one policy by itself. It means eliminating the Trump tariffs on Chinese goods, which would help China greatly. It also a resumption in the continuing decline of the American manufacturing sector and a loss of independence for critical machinery and resources, from medical supplies to rare earth minerals.

Furthermore, regarding his policy toward the CCP virus (novel coronavirus), Biden has told America that, if elected, a mandatory lockdown would be also put in place. That would only worsen the economic impact on American workers of his aforementioned China policy. In other words, Biden would double the blow to the U.S. economy.

No Blame for Beijing

But Biden would go even further. The mega-millionaire former Vice President has emphasized that he does not consider China responsible for the creation and spread of the CCP virus. In fact, he rejects any language that refers to it as coming from China at all. As a result, a President Biden would not pursue any punishment or condemn the CCP leadership for its seminal role in the pandemic and the economic destruction that has come with it.

That would serve to bolster China’s standing in the world and undermine that of the United States, opening us up for criticism of falsely accusing China of causing the pandemic and lying about it. As a result, not only would a Biden presidency greatly weaken the U.S. economy, but would also tarnish U.S. prestige and moral leadership in the world.

As bad and destructive as all of that sounds, it actually gets worse.

That’s because it is the strength of the U.S. economy, along with its will to enforce punishment upon China for violating trade agreements, committing intellectual property and technology theft on a massive scale, and other violations, is not a given. At least, it wouldn’t be in a Biden administration.

In fact, in all likelihood, it would be just the opposite. How would a President Biden compel or coerce Beijing to behave differently without the policies of the Trump administration?

Setting aside the high probability that Biden and his family have been enriched, and therefore compromised by the CCP (and that’s putting it nicely), what other leverage would he have?

He’s already pledged to undo the Trump trade policies toward China and lock the country down again. What Biden hasn’t talked too much about is what his policy toward Hong Kong and Taiwan would be. Nor has he addressed how he would handle China’s militarization of the South China Sea.

China: An Existential Threat to the US

What Joe Biden doesn’t seem to understand is that the struggle with China is more than ideological. It is, in every sense of the word, an existential one.

When one recognizes that fact, as does President Trump, one doesn’t act in half-measures. The threat from China is wholistic in nature, penetrating our media, education system, cultural institutions, our financial sectors, and even by owning our political leaders.

Joe Biden is “Exhibit A” in that latter category. The CCP is leveraging our very system of openness and freedom against us in any and every way that it may. That includes, by the way, the creation and spread of the CCP virus.

Sure, the Democratic Presidential Candidate may have only mentioned restoring the prior economic relationship, but in doing so, he will undercut the strategic aspect that is a direct result of the Trump trade policies.

Eliminate one and you eliminate both.

Resisting the CCP’s efforts against the United States requires a wholistic response, which puts the lie to Biden’s ability or intent to deal with the CCP.

Trump and his people know that America’s power abroad—both in general and specifically with regard to China—is dependent upon American economic strength, which backed up by credible military threat, both of which support U.S. coordinated and effective diplomatic efforts. Foreign policy intentions are only as credible as the will and capabilities to back them up.

President Trump has demonstrated the political will and applied the necessary economic incentives, or disincentives, to thwart China’s intentions abroad, particularly in the United States, as well as to destabilize the Party from within.

Both, in fact, are occurring.

China Feeling the Pain of Trump

In response to Beijing’s aggression, Trump has, among other things, removed the special trade status of Hong Kong and sold billions of dollars’ worth of high-grade defensive military equipment to Taiwan. He has also reinforced U.S. naval presence in and around the South China Sea, standing up to Chinese bellicosity.

Internally, China’s real economy—not the one they project to the world—continues to falter. Yes, the economic numbers are up, but the details matter. Wage cuts and lost jobs are hitting the people hard. As a result, the consumer saving rate is rising. What’s more, the people don’t have faith in the future, which can be reasonably regarded as a lack of trust in the Party.

Who can blame them?

The wealth gap in China has only grown with the pandemic, as the CCP took over more businesses and cracked down even harder on freedom of movement and information. Not surprisingly, China is falling well short of the commitment they made in phase one of their trade deal with President Trump.

Standing up to China and their bullying of the world has been a hallmark of the Trump administration, while laying down before it has been and would be Biden’s path to ill-gotten wealth. That’s why Beijing want you to vote for Joe Biden.

If he wins, Biden will be once again China’s biggest asset in the United States, of which, unfortunately, there are many.