Beijing Will Know More About You Than You Do: Gettr CEO 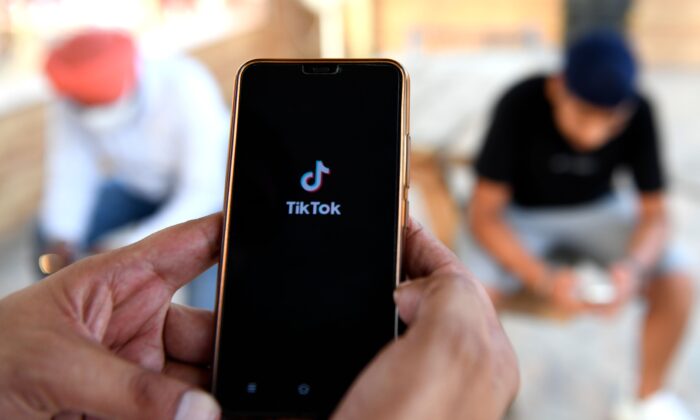 Users browse through the Chinese-owned video-sharing TikTok app on a smartphones in Amritsar, India, on June 30, 2020. (Narinder Nanu/AFP via Getty Images)
By Daniel Y. Teng

When people think of a “data breach,” their natural reaction is to worry about losing information, such as passwords. However, Jason Miller, founder of the social media app Gettr, says that much more is at risk.

“What it’s about is they’re going to know more about your mental makeup than you do, and that’s scary,” he told The Epoch Times on Oct. 1.

Apps backed by the Chinese state, such as TikTok—which is targeting the prized Gen Z and Alpha cohorts—aren’t just collecting data from their users but also giving Beijing the full ability to psychologically profile the users who will be our next generation of leaders, according to Miller.

He said China-based companies, and, by default, the ruling Chinese Communist Party (CCP), now have access to all user information, including credit card details and passwords, from apps such as TikTok and, at the same time, will be conducting “psychographic analysis of an entire generation of people.”

“So, let’s say my oldest daughter is 13, and they start tracking her when she starts an account. A decade later, she’s going through college, they then have a decade of psychographic analysis data on someone they know,” Miller said.

He said this data will give the CCP insight into what younger generations in other countries think about issues such as Taiwan or when “the next virus gets launched.”

“They will know what’s going to move public opinion in very short order,” Miller said. “Fast forward another 10 or 20 years, and say my daughter runs for office. Imagine the manipulative ability for them to have the psychographic analyses of an entire generation of political leaders and voters, not just in the United States but around the world.

“They will know if you’re going to ‘like’; swipe up, left, or right; and what content you will react to before even you do. And think how they’re going to use that to manipulate other governments, people in other countries—and they’re just getting started.”

Questions have long lingered over how China’s state-backed technology companies use the data they collect. Some of the most well-known tech brands in the world are based in China, including TikTok (ByteDance), Huawei, HikVision, WeChat (Tencent), and the world’s largest drone maker, DJI.

China-based companies are subject to a bevy of laws under the CCP that compel cooperation upon demand by the regime.

Notably, the 2017 National Intelligence Law forces China-based companies to share data with the CCP if ordered to do so, and its military—civil fusion doctrine means that technologies developed in the civilian sector can be repurposed for the regime’s People’s Liberation Army.

In response, Arthur Herman, a senior fellow at the conservative think tank Hudson Institute, has warned U.S. leaders to stay ahead of the curve to maintain the technological edge over Beijing.

“The fact that we have a lead doesn’t necessarily mean we’re going to win,” Herman previously told The Epoch Times. “It’s like the hare and the tortoise. We’re like the hare, we’ve sprinted ahead … but the Chinese are moving ahead toward us, slowly but surely.”

Australian Sen. James Paterson has called on political leaders around the world to harness the strengths of Big Tech companies in Silicon Valley that have to operate under the laws of the United States.

“Despite our many legitimate frustrations with our own tech titans, we do have to choose ourselves whether we want them to prevail in their own competition with their counterparts in authoritarian countries,” Paterson said. “Because it will either be Google, Facebook, Microsoft, and Amazon who set the international rules of the road when it comes to technology, or it will be Tencent, ByteDance, Huawei, and HikVision.”