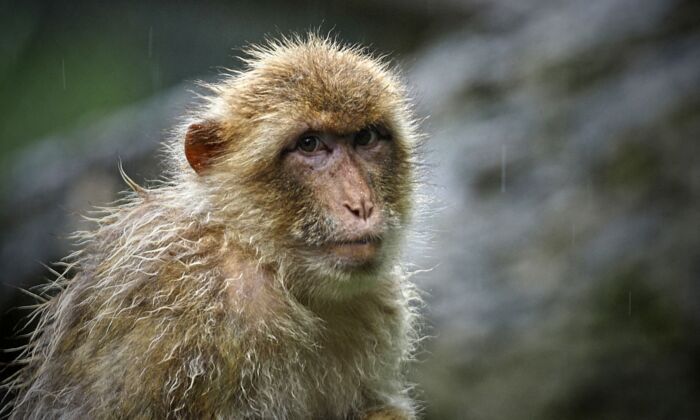 A Rhesus macaque (Macaca mulatta) looks on under heavy rainfall at the Zoo Parc of Beauval in Saint-Aignan, Centre France, on July 13, 2021. (Guillaume Souvant/AFP via Getty Images)
China

Beijing Vet Dies of Monkey B Virus, Which Has 70 to 80 Percent Fatality Rate

China has reported the first death from the rare Monkey B virus in its history. The individual, identified as a veterinarian in Beijing, was infected by monkeys in March and died on May 27.

Monkey B virus (BV), also known as Herpes B virus, has a fatality rate of 70 to 80 percent, wrote the authors of the report published on July 17 in the Chinese Center for Disease Control and Prevention’s English journal China CDC Weekly. The report states that the deceased’s close contacts were tested in April and were found to be free of the virus.

According to the U.S. Centers for Disease Control and Prevention (CDC), humans typically are infected with BV when bitten or scratched by an infected macaque monkey, or have contact with a macaque’s eyes, nose, or mouth. The CDC highlighted that there has only been one case of BV human-to-human transmission documented in history.

It’s unclear which type of monkey the victim was in contact with when he contracted the virus.

The deceased veterinarian was 53 years old. He worked for a non-human primate breeding and experimental institution in Beijing.

On March 4 and March 6, the veterinarian dissected two dead monkeys. One month after the dissections, the veterinarian “experienced nausea and vomiting followed by fever with neurological symptoms,” according to the report.

Because doctors in Beijing didn’t have any experience with BV infections, the veterinarian was asked to visit several hospitals for treatment, but wasn’t diagnosed until April 17, when doctors collected his cerebrospinal fluid and that of his two co-workers to test for monkey-related viruses.

The results showed that the veterinarian was infected with BV.

The authors of the report concluded that “this implied that BV in monkeys might pose a potential zoonotic threat to the occupational workers.”

According to the U.S. CDC, BV infections start with flu-like symptoms, which include fever and chills, muscle aches, fatigue, and headaches. The symptoms typically start within one month after exposure to a BV-infected monkey.

The first human infection was identified in 1932, and since then, only 50 cases of transmission to humans have been reported. Of those infected, most had come into contact with a monkey, and 21 have died.