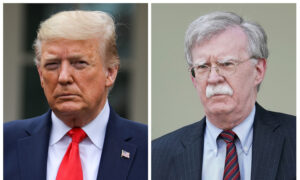 Jan Jekielek
Senior Editor
Jan Jekielek is a Senior Editor with The Epoch Times and host of the show, "American Thought Leaders." Jan’s career has spanned academia, media, & international human rights work. In 2009 he joined The Epoch Times full time and has served in a variety of roles, including as Website Chief Editor. He is the producer of the award-winning Holocaust documentary film "Finding Manny."
View profile
Follow
and Cathy He