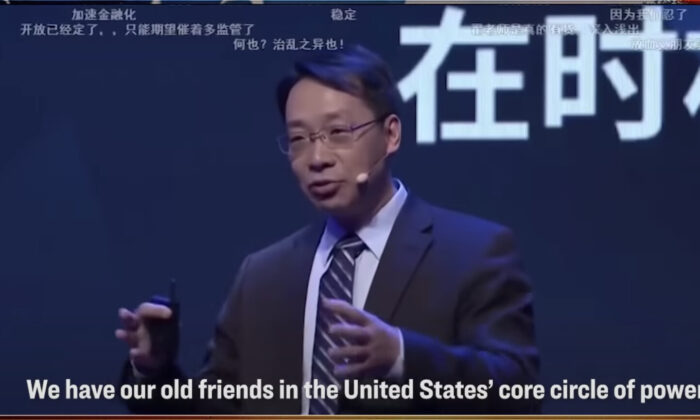 Di Dongsheng, associate dean of the School of International Studies at the Renmin University of China in Beijing, speaking at a seminar shared on Chinese online video-sharing platform Guan Video on Nov. 28. (Screenshot)
US-China Relations

Cathy He
CHINA EDITOR
Cathy He is a New York-based reporter focusing on China-related topics. She previously worked as a government lawyer in Australia. She joined the Epoch Times in February 2018.
View profile
Follow
and Ling Yun

The Chinese communist regime exerted influence over the United States for decades through its “old friends” in Wall Street, but this scheme was disrupted by President Donald Trump’s election in 2016, a Chinese professor recently revealed at a seminar.

Over the past 30 to 40 years, the Chinese Communist Party (CCP) “took advantage of the core power circle in the United States,” said Di Dongsheng, associate dean of the School of International Studies at the Renmin University of China in Beijing, in a speech given at an event in Shanghai, live-streamed on Chinese online video-sharing platform Guan Video on Nov. 28. The clip has since gone viral, and the original video has been deleted.

Di was referring to Wall Street, a sector that started exerting “a very strong influence on U.S. domestic and foreign affairs in the 1970s.”

“So we figured out our path and those we could depend on,” he said.

But from 2008, Wall Street’s influence declined as the financial crisis hit, Di said.

“More importantly, starting in 2016, Wall Street had no influence on Trump,” he said, citing disputes the former businessman had with Wall Street financiers.

However, with a potential Joe Biden administration, Beijing may once again rely on its powerful U.S. backers, the professor said.

“The traditional elites, political elites, and the establishment have a very close relationship with Wall Street,” Di said.

He then referred to allegations that Joe Biden’s son, Hunter Biden, has extensive ties with the Chinese regime and other foreign governments through investments and business dealings.

Bobulinski served as CEO of SinoHawk LLC, a business entity created to formalize the Biden–CEFC investment partnership with the Chinese company. SinoHawk was supposed to have been initially funded with $10 million, which would then grow into billions in investment funds, Bobulinski said at the time. Then-chairman of CEFC Ye Jianming had deep ties with high-level CCP officials.

Di said: “Who helped him [Hunter] build the funds? You understand? There are transactions involved.”

In 2016, then-candidate Trump campaigned on a tough-on-China platform, focusing on the regime’s unfair trade practices that have cost thousands of American manufacturing jobs. As president, Trump in 2018 launched a trade war, slapping billions worth of tariffs on a range of Chinese imports.

In reference to the trade war, Di asked, “So why are we having trouble with Trump, when we were able to handle all kinds of problems between China and the United States from 1992 to 2016?”

He said that previously, “all crises” between China and the United States, such as the U.S. bombing of the Chinese Embassy in Belgrade in 1999, were able to be resolved “within two months.”

The reason for this is that Beijing had “people in high places [in the United States],” Di said.

Wall Street had tried to help the Chinese regime during the U.S.–China trade war, Di added.

“As far as I know, friends from the U.S. told me that they tried to help, but they were too weak,” he said.

Di shared a story to prove his point.

Prior to Chinese leader Xi Jinping’s visit to the United States in 2015, all levels of the CCP had to help “warm up” and “build momentum” for the high-profile event, he said. One such warmup was to create positive public opinion about the Chinese regime. A book release event was organized for the publication of the first English-language edition of “Xi Jinping on State Administration”—a book containing Xi’s speeches on political ideology.

Di said he was assigned to find a venue for the event.

The location was set at a popular independent bookstore on Connecticut Avenue in Washington, D.C.

However, due to the short notice, the bookstore was unable to arrange the time slot. Di claimed the bookstore’s manager was a former reporter based in Asia and he was unwilling to accommodate Di’s request due to his “biases” toward the CCP.

But eventually, Di said, Chinese officials managed to hold the press conference at the bookstore because the store owner was pressured by an “elderly Jewish woman” who had some clout on Wall Street.

The woman was the chairman of the Asia division of a top financial institution on Wall Street, according to Di. She had Chinese citizenship and a Beijing-registered permanent residence.

A Chinese state media report praised the event afterward: “On Sep. 17, 2015, the bookstore hosted Chinese Ambassador to the United States, Cui Tiankai, and a senior Chinese government official for a discussion about Xi’s book on governing China.”

Following the trade war, many American industrial sectors began to shy away from Chinese investments, but Wall Street has deepened its business ties after Beijing’s moves to open up the financial sector.

White House trade adviser Peter Navarro, in an October Interview with The Epoch Times, described Wall Street as “writ large a sociopath,” in response to a question about Wall Street’s continued ramp-up of investments in China.

“They have no morals or patriotism. It’s all about the money,” Navarro said.

Meanwhile, global stock index providers have come under increasing scrutiny over their inclusion of Chinese stocks—with some Chinese firms being tied to the regime’s military or having aided its human rights abuses. Because many investment and pension funds track these indices, it means that Americans are unwittingly financing the CCP’s malign ambitions, U.S. officials have warned.

In November, Trump issued an executive order barring U.S. investments in Chinese companies deemed by the Pentagon to be “owned or controlled by” the Chinese military, to block the flow of American capital to fund the CCP’s military goals. The ban is to take effect in early January 2021. U.S. investors have until November 2021 to divest their securities.

In response, index provider FTSE Russell announced on Dec. 4 that it would drop shares of eight Chinese companies that were on the Pentagon list. These companies’ shares will be removed from its FTSE Global Equity Index Series and several others effective Dec. 21.